Douglas Quan in The Ottawa Citizen. 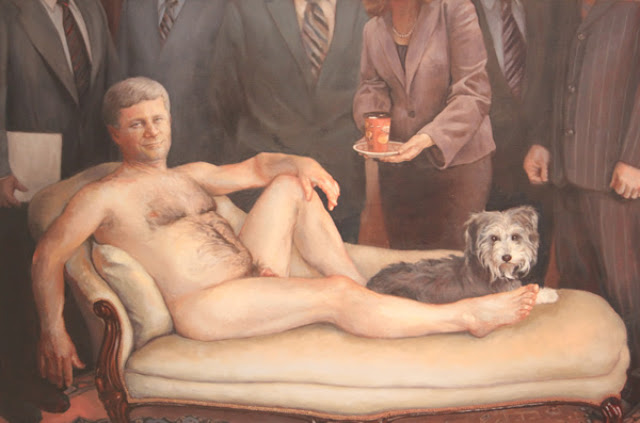 The painting by Margaret Sutherland, titled Emperor Haute Couture, alludes to the Hans Christian Andersen tale, The Emperor’s New Clothes, about a vain ruler who marches naked through town thinking his clothes are made of superior fabric invisible to those who are incompetent or stupid.
In an interview, Ghahramani explains to Douglas Quan why he bought the painting.

How did you come to acquire this?

I’ve always been a fan of satire. I’ve been a subscriber to Private Eye magazine in the U.K., I used to buy Frank magazine. We don’t have enough biting political satire in Canada — I think it’s because we’re a bit too polite. I’d heard about (the painting) a few years ago. It was a laugher for me just like for everyone else at that time — for its shock value. The artist has done the most un-Canadian thing possible, which is to offend people not just for the purpose of causing offence, but for communicating a message. It randomly appeared online for sale. I didn’t think it was real at first. And then I pursued it. Next thing I know, we’ve won.

What message is the painting communicating?

I don’t think the artist is taking a pot shot at Harper personally. It’s not coming from a vulgar, Mad magazine place, it’s coming from a well-thought-out position. It fits so well with Harper where you have a government that just didn’t listen to privacy experts, to civil servants, scientists, just didn’t deliver on the transparency front.

How does the painting convey that theme?

The Prime Minister’s Office centralized all communication. The result was no one could speak out. That’s why in this painting you see all the handlers have no heads. I think there’s a lesson here for all Canadian politicians of the future. If we really have strong ideas on the right side of the spectrum, then the ideas should shine through on their own. Small government, low taxes are good ideas and we don’t need to resort to these Harper tactics to win.

How did you decide to buy the painting?

I didn’t want it to go into the wrong hands. There was a bidding war — some people from China were bidding, some people in the U.S. It tells an important story. It tells a vignette of contemporary Canadian history. I think it should be something that’s studied as a reflection of the last 10 years. Sometimes as you get older and you get a bit more money, you do foolish things. And maybe this is one of those foolish things. I just wanted to capture it and spread it as far and wide as possible, put it on tour, share it with whoever wants it, whatever gallery or university.

How much did you pay?

I prefer not to focus on the price, as it makes it look like a commercial transaction. Some speculative numbers have been published, but they’re incorrect.

How do you describe your political leanings?

I’m libertarian. I’m not really in any party and I try not to pay attention because it’s too frustrating. But you have to follow the headlines and see what’s going on because it affects your business. But I don’t think what we saw was a Conservative government. They came out wanting to do things differently. In the end they ended up falling into the same traps. And I think the allure of power was too good to give up and they started digging deeper and doing things that Preston Manning probably wouldn’t support.

You made headlines for contributing $1 million to the effort to repeal Bill C-51. Why was that important?

C-51 is a very dangerous and un-Canadian law. It exemplifies what I’ve just been saying. List the people who are against C-51 — they are people from the left all the way to the right. They didn’t listen to any of the experts. They took all that advice and threw it in the garbage. There are other options to fight terrorism.

Are you considering a run for politics?

Do not even write that, please. Absolutely not. I’m an entrepreneur. I’m a business person. I’m very busy — hardly have any time to sleep. I can’t consistently ever see myself doing that job because I hate doing PR.

Any chance this painting will end up in your home?

My wife won’t let that happen. She said, “There’s room for one pudgy guy in this house, and that’s you.”

The interview has been condensed and edited for length and clarity.
National Post
Published by Bado at 4:22 PM