Cartoonist Jacques Hurtubise, aka Zyx, died this past week in Montreal of heart failure.

A key figure in the development of comics culture in the province of Quebec, Hurtubise was one of the founders of the seminal humour magazine Croc and was a ceaseless innovator and promoter of comics throughout his career.

Hurtubise was born in Ottawa but grew up in Rimouski, Quebec during the social and political upheavals of The Quiet Revolution, emerging from the University of Montreal with a degree in electrical engineering at the peak of student activism, the nationalist movement, and the underground press; a period when the idea of a distinct Quebecois identity was really informing all aspects of culture, including the previously neglected medium of comics.

With a group of student friends, Hurtubise wrangled a couple of government grants and in 1971 published the first issue of L’Hydrocéphale illustré, a free magazine with comics and a print run of 10000 copies designed to be distributed through college campuses and headshops. The magazine introduced a number of cartoonists who would become prominent in the Quebec comics scene over the next two decades, including Michel Demers, Pierre Fournier and Réal Godbout.

A second issue of the magazine was published in May of ’72, but it folded soon after from lack of funding. However, the response to their efforts convinced the group of a potential market for home-grown comics publications in the province.

The group’s next venture was a comic strip syndicate that pitched a collection of features to Quebec newspapers. The Coopérative des Petits Dessins was the vehicle for Hurtubise to introduce his signature character, Sombre Vilain, the huge-hatted bad guy whose amoral adventures the artist would shepherd through a variety of mediums for the rest of his professional life. Hurtubise signed the strip with his nom de plume, Zyx. The strip ran in the PQ organ Le Jour from 1972 until the paper folded in 1976.

Using some more grant money, Hurtubise and his gang launched a number of historical research and exhibition projects with the goal of promoting Quebec comics past and present in a variety of venues, including New York and Toronto comic conventions, culminating in the travelling 1973 exhibit “Le Show de la BDQ”, and the 1975 “Festival de la bande dessinée de Montréal.”

During this time Hurtubise also became known as a critic and commentator on comics in Quebec media, regularly appearing on several tv shows and writing for newspapers and magazines. He is also responsible for publishing Pierre Fournier’s countercultural superhero Capitaine Kébec.

In October 1979, Hurtubise, along with co-founders Hélène Fleury and Roch Côté, published the first issue of Croc, a humour magazine with a large comics component. The magazine was an almost immediate hit, running for 15 years with a peak circulation of close to 100,000. 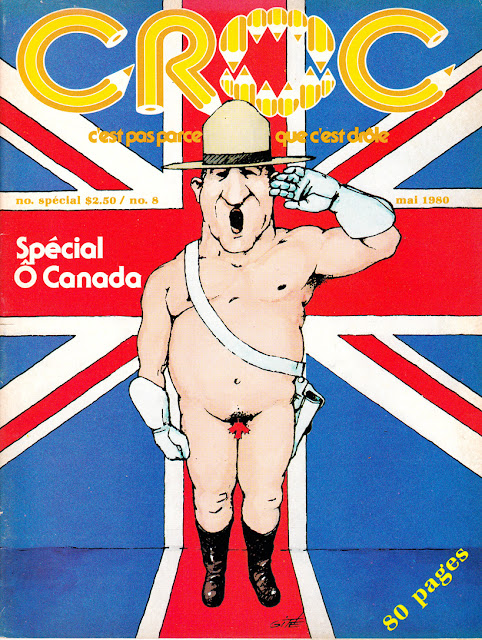 Hurtubise’s Sombre Villain was a regular feature and the cartoonist himself appeared regularly in fumetti strips and ads, although he gradually gave up cartooning as the demands of editing and writing for the magazine became greater.

Croc gave many cartoonists their first professional gigs and a list of its contributors reads like a Hall of Fame for 70s and 80s BDQ comics-makers. Réal Godbout’s Red Ketchup series is perhaps the longest-lasting legacy of Croc, but major talents like Jean-Paul Eid, Garnotte, Gité, Serge Gaboury, Claude Cloutier, Rémy Simard, Michel Rabagliati and Gabriel Morrissette saw print in its pages.

The magazine spawned several short-lived spin-offs, including a political weekly (Croc-Hebdo, 1985), an adult version (Maximum, 1986), and teen version (Anormal, 1987). The publication of competing Safarir led to Hurtubise launching a French-language edition of Mad, Mad-Québec, for a short period in 1991.

Croc-branded promotions, including a board game, radio and tv franchises marked the peak of the magazines popularity in the late 1980s but declining sales saw Croc cease publication with issue 189 in 1995.

Hurtubise also ventured into a few comics-only publications after Croc’s initial wave of success, including the fondly-remembered but unfortunately aptly-named Titanic (12 issues, 1985), which featured lush, locally-produced action-adventure, fantasy, and humour serials after the style of European anthologies.

Post-Croc, Hurtubise largely left comics behind for a career in tech, eventually ending up as an executive with multimedia giant Quebecor. He was inducted into the Shuster Awards Hall of Fame in 2007.

Jacques Hurtubise died Friday, December 11 after suffering a heart attack.
Published by Bado at 1:00 AM