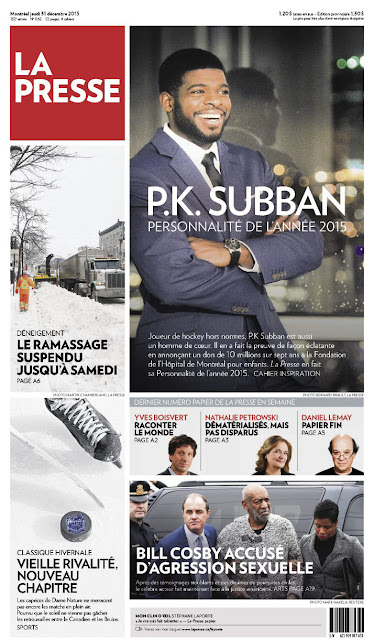 
As promised in September, the Montreal-based daily is scrapping its Monday-to-Friday printed papers starting Jan. 1, ending a 131-year run of publishing hard-copy news throughout the week.

The last daily print copy is a special edition featuring dozens of momentous front pages from the paper’s history. And La Presse will still deliver newsprint copies on Saturdays. But daily printing is coming to an otherwise quiet halt, without even so much as a newsroom gathering planned to mark the end of an era.

“Maybe it’s a sign that a lot of people here have already turned the page – pardon the pun,” said Charles Côté, president of Le syndicat des travailleurs de l’information de La Presse (STIP), the union that represents newsroom staff, and also the paper’s environment reporter. “We’ve been told for the past three years that the tablet is our main driver now.”

La Presse is among the first newspapers in North America to reach what media analyst Ken Doctor has called “a crossover point,” where digital revenue far surpasses print revenue. Its owner, Gesca Ltée, a subsidiary of Power Corp. of Canada, does not disclose financial results, but a spokesperson said 85 per cent of the paper’s revenue now comes from its free tablet edition, La Presse+. The company will save $30-million annually by reducing printing and cutting jobs, but is now almost entirely dependent on digital advertising to support its journalism.


“We feel that this is more the way of the future,” said Caroline Jamet, La Presse’s vice-president of communications. “A mostly black-and-white, two-dimensional paper with no interactivity is just something that less and less people are interested in.”

Not everyone agrees. Some devoted print readers have promised to ditch La Presse, even though Gesca signalled its plan to go all-digital for years. And since the change was announced in mid-September, 70,000 new users have downloaded the app, suggesting at least some are willing to make the switch.

“I felt a little lost, like, what am I going to do?” said Joelle Bourque, 60, a Montreal resident and long-time print subscriber. She owns an iPad and will try La Presse+, but is relieved she will still receive a paper copy on Saturdays. And she is considering subscribing to rival paper Le Devoir to stick with print during the week.

“It’s a ritual. You know, people get used to their habits,” she said. “I know that kids of two years old use [tablets], but it’s an effort to learn it.”

In a previous interview, president and publisher Guy Crevier said abandoning weekday printing was “sad, but at the same time it’s a relief because we’re leaving a sector that is in decline.”

La Presse’s print readership had already fallen by about half, to fewer than 80,000 copies on weekdays, compared with 220,000 readers who open the tablet edition each day. But it will have a lesser presence on newsstands, in restaurants and at coffee shops, where non-subscribers might find it. And there is nostalgia among journalists for a medium that, for their entire lifetime, signalled a story’s importance.

“When I see the paper edition, I always remember the feeling of having one of your news pieces on the front page, front and centre,” Mr. Côté said. “That’s a feeling that lingers, for sure.”

Many La Presse employees won’t be around for the next chapter. The paper is cutting 158 full- and part-time jobs, more than 40 of which are in the newsroom, plus dozens of jobs in circulation, administration and customer service. The team that produces the print paper has been slashed by half to 10 people who will shape the Saturday paper, which still circulates about 136,000 copies each weekend.

The newsroom union is contesting the cutting of 10 positions through arbitration, and the company agreed less than two weeks ago to offer voluntary buyouts, which three or four employees are expected to take, which could save some tablet-focused jobs.

Over all, La Presse’s newsroom staff has grown over the past three years to 283 people, however, to meet the tablet edition’s demands.

“I’m sure people are sad,” Mr. Côté said. “I’m hoping that our news stories and our big features stories will still have as much impact as before.”
Published by Bado at 5:53 PM