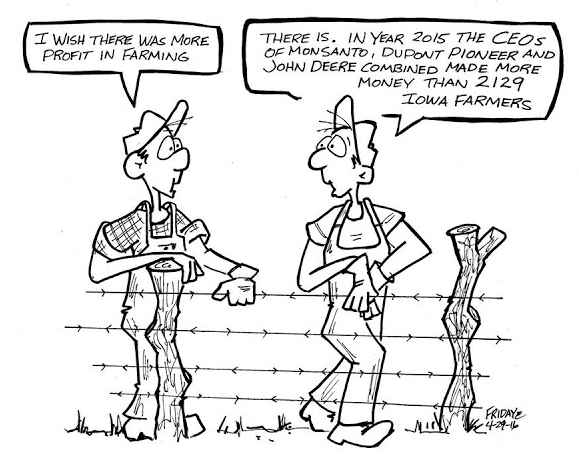 Rick Friday is no longer the Editorial Cartoonist for Farm News due to the above cartoon, published on Friday, April 29th.

Apparently a large company affiliated with one of the corporations mentioned in the cartoon was insulted and cancelled their advertisement with the paper, thus, resulting in the reprimand of my editor and cancellation of It's Friday cartoons after 21 years of service and over 1090 published cartoons to over 24,000 households per week in 33 counties of Iowa.

I did my research and only submitted the facts in my cartoon.

That's okay, hopefully my children and my grandchildren will see that this last cartoon published by Farm News out of Fort Dodge, Iowa, will shine light on how fragile our rights to free speech and free press really are in the country.


The Association of American Editorial Cartoonists issued the following statement:

The Association of American Editorial Cartoonists condemns the decision of Iowa's Farm News publication to part ways with long-time cartoonist and contributor Rick Friday on the grounds of an unhappy advertiser.

This decision is a disservice to journalism and to the people of Fort Dodge, Iowa. This represents a dangerous trend among newspapers where the vitally important wall separating editorial content from advertising is beginning to erode.

The cartoon in question was truthful. Friday displayed courage in speaking out for the less fortunate in the farming industry. The cartoon was a factual statement on the increasing economic disparity of Big Agribusiness and the small farmers of Iowa.

He should be thanked for his work, not disgracefully shown the door. For us to maintain a strong freedom of the press, editors and journalists around the country should be beholden to truth and the public good, not the corporate interests of their advertisers. 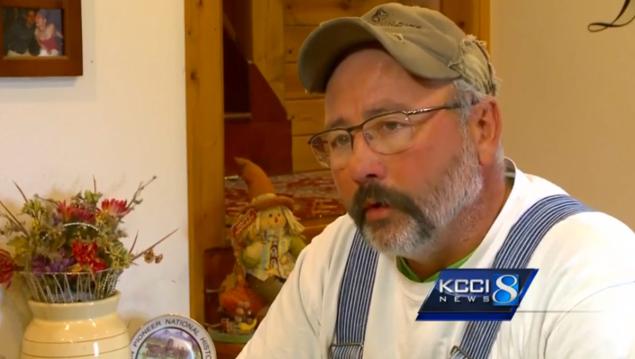 "Newspaper's political cartoonist loses job after corporate advertiser complains about his latest drawing" in The Daily News.
"Why the controversy over an Iowa cartoonist is no laughing matter" in the Columbia Journalism Review.
Published by Bado at 1:00 AM