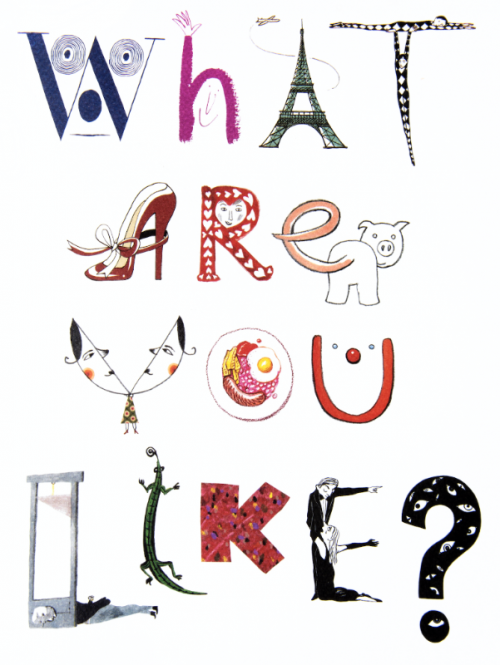 Chis Beetles is very generously waiving all fees and opening the exhibition with a champagne private view on Thursday 19 May. What Are You Like? will run until Sunday 22 May 2016.

This is a unique opportunity to purchase original works that were produced in 2008 by an extraordinary roll call of artist-illustrators, painters, designers and public figures for whom drawing is important. Each work is autobiographical, based on the Victorian parlour game in which players were asked to describe themselves through a series of drawings of their favourite things.

The original exhibition toured to ten different museums and galleries around the UK, finally coming to an end in 2014, by which time it had been seen by almost half a million people. The exhibition anticipated the opening of House of Illustration in Granary Square in July 2014, and the contributors have very generously agreed for their work to be sold to enable the organisation to continue to pursue its enterprising exhibition programme, to extend its illustration-led learning work and to promote new illustration talent.


House of Illustration receives no public funding and so is entirely reliant each year on fundraising.The original works in the exhibition include pieces by artists Quentin Blake, Posy Simmonds, Steven Appleby and Peter Brookes as well as musicians Eric Clapton and Brian Eno.

All works will be exhibited and can be purchased online now.

Anyone wishing to buy can contact the Chris Beetles Gallery, or Tracy French at House of Illustration: tracy.french@houseofillustration.org.uk

For more information about House of Illustration, visit the website here.
Published by Bado at 1:00 AM