The Great British Graphic Novel Exhibit at the Cartoon Museum 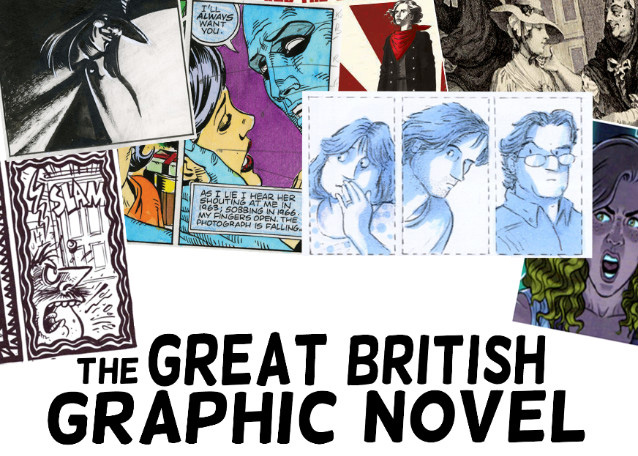 An exhibition looking at the rise of the British Graphic novel with works by William Hogarth, Kate Charlesworth, Dave Gibbons, Martin Rowson, Posy Simmonds, Bryan and Mary Talbot and many others.

The exhibition The Great British Graphic Novel opened at the Cartoon Museum and it runs until 24 July 2016. Over 125 pages of original art by more than 50 artists are on display. You can also see original material from sketchbooks, as well as prints, and comics, and books… in short, something to satisfy every visitor. 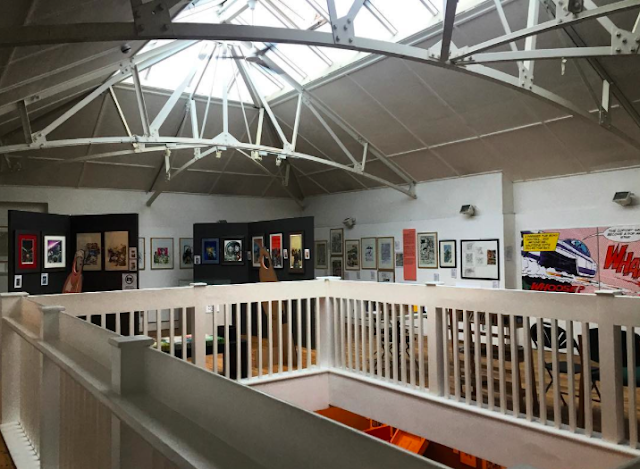 During the 1970s British underground artists such as Bryan Talbot, Angus McKie, and Chris Welch drew long sequential art narratives, some of which appeared as books before the decade was out. These were a mixture of science fiction and fantasy stories and left-wing histories of the class struggle; they partook of the radical politics, formal experimentation, and sexual frankness for which the underground comix were notorious. Newspaper cartoonists were active graphic novelists too; the exhibition shines a light on lesser-known graphic novels such as Posy Simmonds’s True Love and Ken Pyne’s The Relationship, both released in 1981. 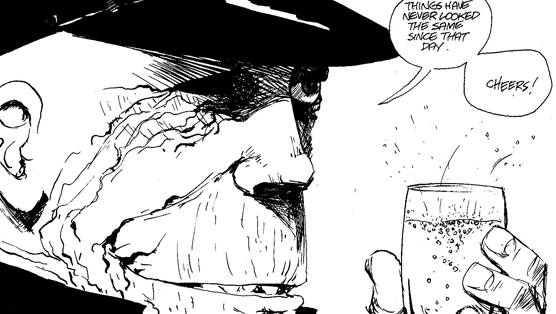 The Great British Graphic Novel goes back even further in time. The cultural tributaries that feed graphic novels are centuries old and visitors will see key moments from those artistic traditions and how recent graphic novelists consciously engage with them. Eddie Campbell’s Bacchus is a great example. In the 1980s and 1990s Campbell brought the adventures of the Greek god Bacchus up to the present. Bacchus retold myths, tangles with the mafia, and became the sovereign of a pub that secedes from the United Kingdom. As the god of wine and revelry Bacchus presented an ideal opportunity for Campbell to revisit the history of engraving and print-making because so many illustrators over the years have depicted the dangers (and pleasures) of alcohol consumption. Bacchus’s arch-nemesis is Mr Dry, an advocate of abstinence based on a character from Prohibition-era political cartoons, and in one scene featured in the exhibition Mr Dry chases Bacchus through a series of classic prints, starting with Beer Street by the eighteenth-century artist William Hogarth.

As well as looking back in history The Great British Graphic Novel is about what’s happening right now, whether it’s the award-winning The Motherless Oven by Rob Davis or the massively popular The Wicked + The Divine by Kieron Gillen and Jamie McKelvie. With an eye on the graphic novels we’ll be reading in the future, works-in-progress by Kate Charlesworth and Asia Alfasi are on display to whet your appetite for their eventual publication. One of the hardest jobs we’ve had is showing the sheer diversity of graphic novels in the UK today, but we’ve made a good stab at it, and there’s art from a plethora of genres ranging across autobiography, SF, history, Young Adult fiction, and reportage.

The exhibition showcases graphic novels that may have passed readers by when they first appeared, such as Gary Spencer Millidge’s Strangehaven and Nabiel Kanan’s Exit. These works came out of the small press / self-publishing scene of the 1990s, a fertile and eclectic moment in British comics history. Seeing how these artists construct their panels and pages is a masterclass in how to innovate with form while telling a gripping story.

And, while the exhibition is healthily sceptical of the contention that ‘comics grew up’ around 1986 or thereabouts, there’s no doubt that some dazzling graphic novels were produced by the UK creators associated with DC Comics and the late 1980s turn towards “mature readers.” If you expect to see original art from Watchmen, The Killing Joke, Arkham Asylum, The Sandman, V for Vendetta, or Hellblazer, you won’t be disappointed. After all, these texts have profoundly shaped our notions of what comics can do.

There are so many more graphic novels than the (large) handful I’ve mentioned here. Our definition of the British graphic novel is capacious enough to include a page from a Strontium Dog adventure, drawn by Spanish artist Carlos Ezquerra for a story serialised in 25 episodes in the anthology comic 2000AD. Why not? Serialisation was the common practice for Victorian novelists. For a writer like Dickens, publication in book form came after a story had been serialised in a journal.


Dr Paul Williams is Senior Lecturer in Twentieth-Century Literature at the University of Exeter and curator of the exhibition.