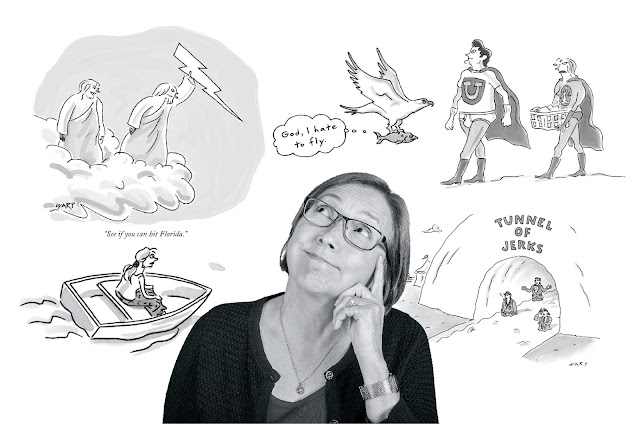 Kim Warp is a cartoonist whose work appears regularly in The New Yorker and Reader’s Digest, among other publications. She has lived in Virginia Beach since 2004.


People are usually surprised when I tell them I’m a cartoonist. Maybe it’s because I’m not silly and I don’t tell jokes. Most cartoonists I know are observers. We stand in the corner. I’ve drawn professionally since around 1982. I worked at Boeing after that, in Seattle. Once I had kids, I stayed home and started drawing professionally and more successfully in 1994. 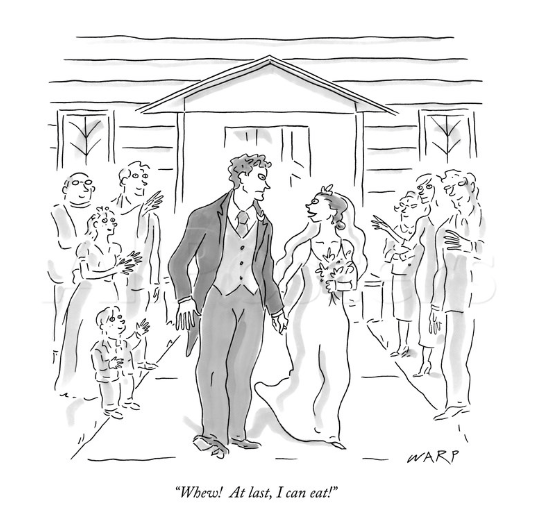 I connected with some women cartoonists in the early days of the Internet. They were submitting to The New Yorker, so I submitted there, too, as practice. They bought one pretty quickly. It shocked me. My cartoons often start with something scribbled in my notebook, an idea. I see something sticking out of the dirt and I gently brush around, to see if something’s there. The best ideas are often down deep – tied to emotions, things you don’t want to talk about.

I don’t work every day, but I’m always writing in my notebook, little snatches. It’s like I have a shark in my brain, on the lookout for something floating by. Usually, I’m trying to make myself laugh. If I think, “Oh, well, this is what readers like,” then it won’t be funny. You have to write from a real place – or try to.

Every Wednesday, about 50 of us send 10 cartoons to The New Yorker. So, Monday and Tuesday are my panic days. My acceptance rate is about 5 percent. On a good week, you sell one. On a bad week, none. It’s discouraging, but it can also be funny. You start turning in things you know they’ll reject. And then, sometimes, they end up taking those.

I once drew an Oscar statuette with big breasts, and my editor asked me to tone it down for publication. You’d never believe when you’re starting out that one day you’ll have a conversation with a New Yorker editor about boobs.

Cartoons are a way to talk about serious things in a humorous way, a back door to people’s brains. They can be silly, of course, and that’s good, too. But cartoonists are sensitive people, the hairs on the arm of the country. We react to things before others react. We’re first alert.

Lately, I’ve been writing about ambition and success. It’s a big deal, as a cartoonist, to get into The New Yorker. You ask yourself, “Is it everything I thought it would be?” I once did a cartoon where Ahab had Moby Dick on the wall. His wife says, “Happy?” It’s like that. I always want to do one more funny cartoon.

That’s my goal: just one more really funny one.