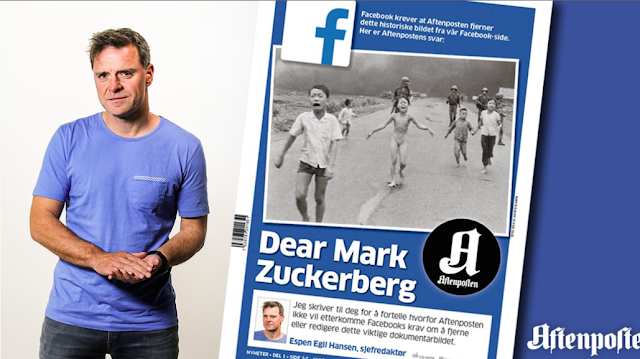 Norway’s largest newspaper published a front-page letter to the Facebook CEO lambasting the company’s decision to censor a photograph of the Vietnam war.

I follow you on Facebook, but you don’t know me. I am editor-in-chief of the Norwegian daily newspaper Aftenposten.

I am writing this letter to inform you that I shall not comply with your requirement to remove a documentary photography from the Vietnam war made by Nick Ut.

Not today, and not in the future.

The demand that we remove the picture came in an e-mail from Facebook’s office in Hamburg this Wednesday morning. 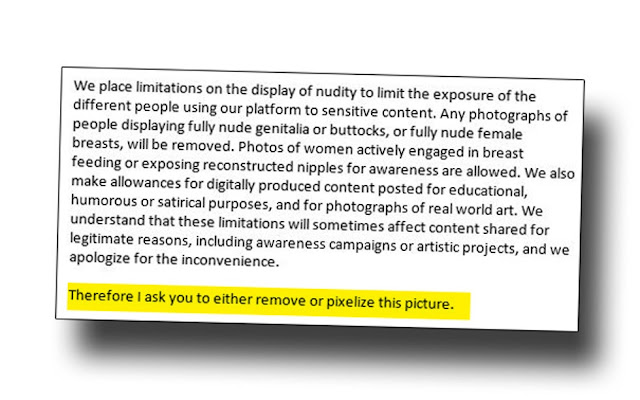 Less than 24 hours after the e-mail was sent, and before I had time to give my response, you intervened yourselves and deleted the article as well as the image from Aftenposten’s Facebook page.

To be honest, I have no illusions that you will read this letter. The reason why I will still make this attempt, is that I am upset, disappointed – well, in fact even afraid - of what you are about to do to a mainstay of our democratic society. 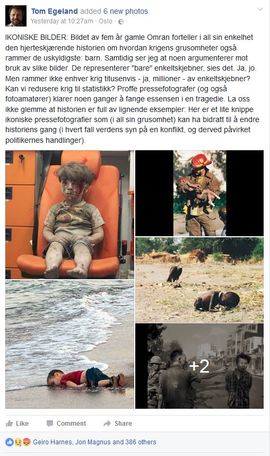 First some background. A few weeks ago the Norwegian author Tom Egeland posted an entry on Facebook about, and including, seven photographs that changed the history of warfare.

You in turn removed the picture of a naked Kim Phuc, fleeing from the napalm bombs – one of the world’s most famous war photographs.

Tom then rendered Kim Phuc’s criticism against Facebook for banning her picture. Facebook reacted by excluding Tom and prevented him from posting a new entry.

Listen, Mark, this is serious. First you create rules that don’t distinguish between child pornography and famous war photographs. Then you practice these rules without allowing space for good judgement.

Finally you even censor criticism against and a discussion about the decision – and you punish the person who dares to voice criticism.

Facebook is for the pleasure and benefit of the whole world, myself included, on a number of levels.

I myself, for instance, keep in touch with my brothers via a closed group centered on our 89 year old father.

Facebook has become a world-leading platform for spreading information, for debate and for social contact between persons. You have gained this position because you deserve it.

But, dear Mark, you are the world’s most powerful editor. Even for a major player like Aftenposten, Facebook is hard to avoid.

In fact we don’t really wish to avoid you, because you are offering us a great channel for distributing our content. We want to reach out with our journalism.

However, even though I am editor-in-chief of Norway’s largest newspaper, I have to realize that you are restricting my room for exercising my editorial responsibility. This is what you and your subordinates are doing in this case.

I think you are abusing your power, and I find it hard to believe that you have thought it through thoroughly.

Let me return to the picture I mentioned by Nick Ut. The napalm-girl is by far the most iconic documentary photography from the Vietnam war.

The media played a decisive role in reporting different stories about the war than the men in charge wanted them to publish. They brought about a change of attitude which played a role in ending the war.

They contributed to a more open, more critical debate. This is how a democracy must function.

The free and independent media have an important task in bringing information, even including pictures, which sometimes may be unpleasant, and which the ruling elite and maybe even ordinary citizens cannot bear to see or hear, but which might be important precisely for that reason.

«If liberty means anything at all, British George Orwell wrote in the preface to Animal Farm, «it means the right to tell people what they do not want to hear.»

The media have a responsibility to consider publication in every single case. This may be a heavy responsibility. Each editor must weigh the pros and cons.

This right and duty, which all editors in the world have, should not be undermined by algorithms encoded in your office in California.

Mark, please try to envision a new war where children will be the victims of barrel bombs or nerve gas.

Would you once again intercept the documentation of cruelties, just because a tiny minority might possibly be offended by images of naked children, or because a paedophile person somewhere might see the picture as pornography?

Facebook’s Mission Statement states that your objective is to “make the world more open and connected”.

In reality you are doing this in a totally superficial sense.

If you will not distinguish between child pornography and documentary photographs from a war, this will simply promote stupidity and fail to bring human beings closer to each other.

To pretend that it is possible to create common, global rules for what may and what may not be published, only throws dust into peoples’ eyes.

The last decade has shown the extent to which unpredicatable and destructive things can happen when publication refuses to take into account the context.

The controversy over the Mohammad caricatures, which flared in late 2005 and still remains a heated debate, had unknown consequences simply because the context and the original justification for publication were ignored. 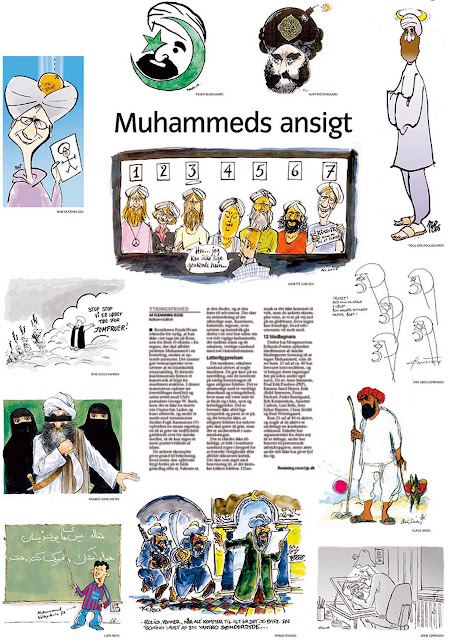 The drawings were put into entirely new contexts, censured and condemned based on allegedly universal religious rules.

This resulted in large demonstrations, violence and killings – and a remaining, potent threat against the freedom of speech.

Some of the persons involved must still live with police protection.

Facebook did not go global until this controversy had passed its peak.

Your approach, Mark, might possibly have been to ban publication of Mohammad-drawings?

If so, Facebook would in a stereotype way have stood on the side of the extreme religious forces, in opposition to the freedom of speech.

You would have overruled the individual editor’s assessment.

Those of us who were in the centre of events at the time had to weigh the pros and cons day by day – and make decisions based on the reality we were in.

It was – and remains – different in Oslo and Karachi.

The controversy over the caricatures demonstrates just how impossible and illogical it is, trying to live with universal rules for publication in a time which is multi-religious, muli-cultural and multi-everything.

Every human practice differs a lot as to geography, politics, social and economic conditions.

The least Facebook should do in order to be in harmony with its time is introduce geographically differentiated guidelines and rules for publication.

Furthermore, Facebook should distinguish between editors and other Facebook-users. Editors cannot live with you, Mark, as a master editor.

These measures would still only soften the problems.

If Facebook has other objectives than just being as big as possible and earn as much money as possible – and this I am still convinced that you have, Mark – you should undertake a comprehensive review of the way you operate.

You are a nice channel for persons who wish to share music videos, family dinners and other experiences. On this level you are bringing people closer to each other.

But if you wish to increase the real understanding between human beings, you have to offer more liberty in order to meet the entire width of cultural expressions and discuss substantial matters.

And then you have to be more accessible.

Today, if it is possible at all to get in touch with a Facebook representative, the best one may hope for are brief, formalistic answers, with rigid references to universal rules and guidelines.

If you take the liberty to challenge Facebook’s rules, you will be met – as we have seen – with censorship.

And if someone will protest against the censorship, he will be punished, as Tom Egeland was.

I could have continued, Mark, but I have to stop at this point. I have written this letter to you because I am worried that the world’s most important medium is limiting freedom in stead of trying to extend it, and that this occasionally happens in an authoritarian way.


PS. I enclose a commentary from Aftenposten’s 73 year old cartoonist Inge Grødum to the censorship practiced by Facebook. What does the algorithm say? Is it within? 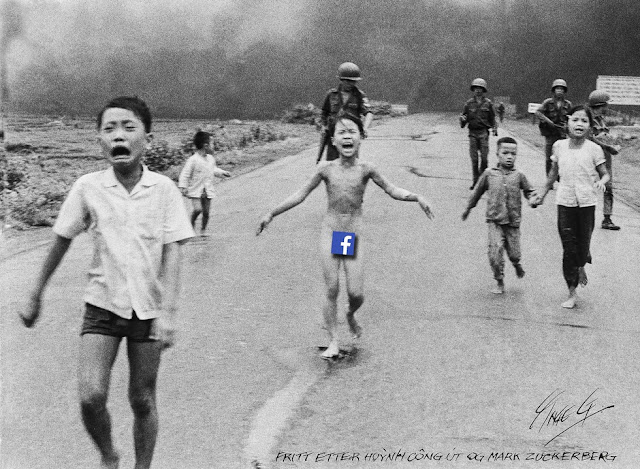 Facebook reversed its decision to censor the photo of the little Napalm girl. 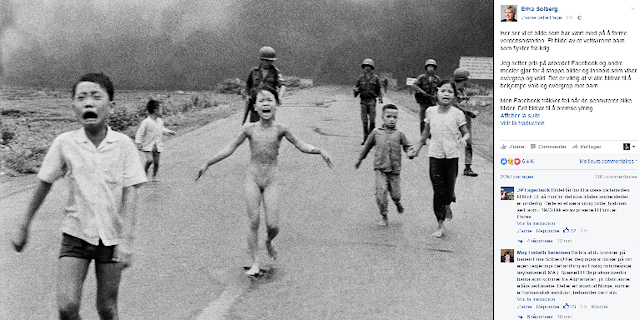 "Facebook backs down, will no longer censor the iconic ‘Napalm Girl’ war photo" in the Washington Post.
Published by Bado at 12:00 AM