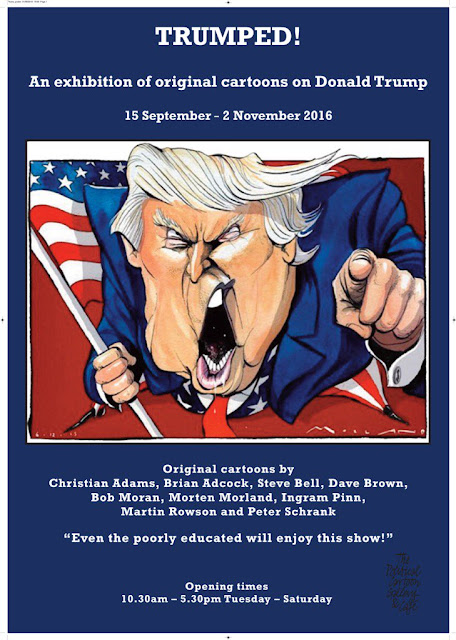 With his strange hair, strong views and stressful effect on liberals, Donald J Trump, “The Donald”, is an unusually lavish gift from the Republican Party to the cartoonists of the world.

Their skill and ingenuity in lampooning a man often said to be beyond caricature is celebrated later this month by the Cartoon Gallery in London, where works by some of the most famous and brilliant names in the business will be on display - including The Independent’s Dave Brown and Brian Adcock.

Of course, American presidential contests have often thrown up some remarkably easy, even grotesque, targets. Richard Nixon, for example, owed much of his early reputation for being a tricky character from the unrelenting attacks on him by (Herbert Lawrence) Herblock, who in the 1950s invariably drew him with a heavy five o’clock shadow, and up to no good. A more sensitive man than often assumed, these hurt Nixon more than conventional lines from opponents.

Ronald Reagan’s quiff, the jagged features of Abe Lincoln, FDR’s cigarette holder and eyeglasses, George W Bush’s resemblance to a chimp, Obama’s ears – all have left us a rich heritage of unmistakable imagery.

Jimmy Carter’s toothy grin was so famous that he was sometimes drawn, Cheshire-cat style, with that alone. Hillary Clinton, despite - or perhaps because – the fact that she is a female novelty has not yet attracted the sort of vicious distortions that her male counterparts have. Maybe she will. Meantime, enjoy Trumped!