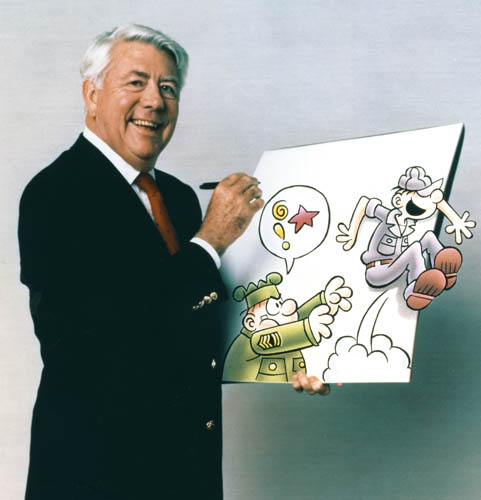 Cartoonist Mort Walker has passed away at his home in Stamford, Connecticut at the age of 94.

Addison Morton Walker was born in El Dorado, Kansas, on Sept. 3, 1923, the third of four siblings, and grew up in Kansas City, Missouri.

He always knew he wanted to be a cartoonist and by the age of 12, was regularly publishing his own cartoons in magazines such as Inside Detective and Flying Aces, and at 15, had a comic strip in the Kansas City Star.

He was drafted while attending college in 1943 and was sent to Italy as an intelligence officer. His experience in the Army would provide the characters and source material he would later use in Beetle Bailey.


After being discharged four years later, he returned to college and after graduating, moved to New York to pursue a career in cartooning.

A Saturday Evening Post editor suggested he create a college-themed strip since Walker was familiar with the college scene.

King Features picked up Walker's college-based strip about a slacker named Spider in 1951. After six months, it had a low syndication of 25 papers. 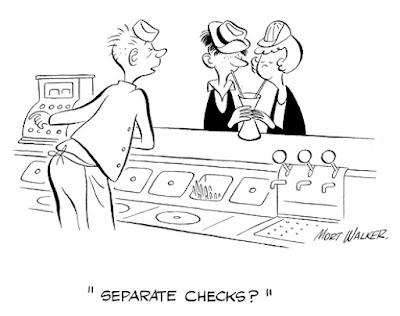 A Philadelphia newspaper editor suggested sending Spider to the Army. Walker knew that the interest in Army-themed comic strips during World War II faded after the war ended.

Fearing the same would happen with strips during the Korean War, Walker was reluctant to add in the Army theme, but eventually did. After Spider went to the Army, 200 newspapers picked up the strip, and Spider was renamed Beetle Bailey.

The Camp Swampy ranks included Sarge, who was based on Walker’s own sergeant; Gen. Halftrack, inspired by a corrupt major; and Plato, an ink version of Browne. Walker was Lt. Fuzz, a young officer who takes himself too seriously.

His signature strip was eventually distributed by King Features Syndicate to 1,800 newspapers in more than 50 countries for a combined readership of 200 million daily.


In 1954, Walker teamed up with illustrator Dik Browne to create a spin-off strip about Beetle's sister, Lois, and her family living in the suburbs.

Walker used his own family experience of raising seven kids to provide the gags he would write in Hi and Lois. Readers never saw Hi and Lois argue, however, since Walker's wife feared that readers would think they were fighting in real life.


Walker then branched out into a fantasy-themed strip, Boner's Ark, with walking and talking animals on a ship. Walker often signed these strips "Addison."

While Beetle Bailey and Hi and Lois were strips based on personal experience, Boner's Ark was his commentary on modern day mores.


He collaborated with cartoonist Jerry Dumas on a visionary project called Sam's Strip, where the main character, Sam, ran his own comic strip. Every week, iconic characters from other comic strips, like Donald Duck, Dagwood, and Popeye, all meticulously drawn by Dumas, would stop by and become part of the plot.


Sam's Strip lasted less than two years before it was pulled in 1963, but historians credit it as one of the first high-concept, post-modern comic strips.

Sam made a comeback of sorts in 1977 when King Features Syndicate asked Walker and Dumas to create a new strip featuring Sam.

Sam and Silo, the ongoing story of a small town sheriff and his deputy, was born and was in circulation until Dumas' death in 2016.

Mort Walker received the “Reuben Award for Cartoonist of the Year” for 1953 and over the years he garnered pretty much every award a cartoonist can receive. He also served as National Cartoonists Society's president from 1959 to 1960.

In 1974 he founded the International Museum of Cartoon Art, the first museum devoted to the art of comics. It was initially located in Greenwich, CT, then Rye Brook, NY, before moving to Boca Raton, FL in 1992.

The museum merged with the Billy Ireland Cartoon Library and Museum at Ohio State University in 2008.

"Mort Walker, whose ‘Beetle Bailey’ was a comic-page staple for decades, dies at 94" in The Washington Post.
Published by Bado at 5:21 PM