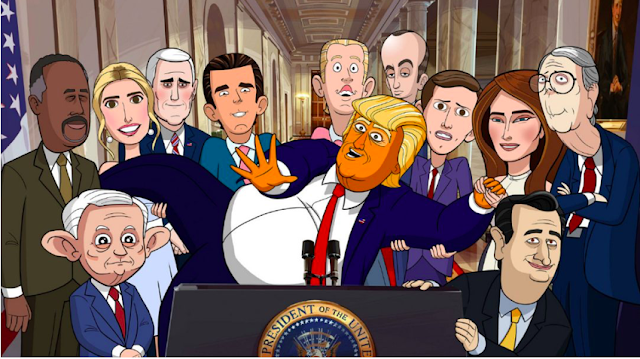 Showtime’s Our Cartoon President, an animated parody series inspired by a popular running bit on The Late Show With Stephen Colbert will debut on Feb. 11.

The highly anticipated show, which features a bumbling Donald Trump in the White House, is produced by The Late Show host Stephen Colbert and three-time Emmy nominated writer R.J. Fried.

It will debut after some spirited NAFTA talks on Canada’s Crave TV in February. The show is based on the Animated Trump shorts that are featured on Colbert’s show.

In an interview, Fried, the show runner and writer of the series, gave the Star some exclusive spoilers and insights into Canada-US. relations for the premiere season.

“One of the episodes is a state dinner where Justin Trudeau comes to town and Trump, jealous of Canada’s Obama, who is young, good-looking and smart decides he wants to outdo him,” says Fried in an interview.


“Trudeau’s abs will make a cameo in that episode at some point. So his abs will definitely be there along with his good looks and charm.”

A scene where Trump takes off his shirt to best Trudeau might be in order, but Fried isn’t saying. The show is expected to debut halfway through the season.

However, there appears to be limits to the cartoon presidency: When asked whether Trump would consider “nuking” Canada as a deflection over the Robert Mueller investigation, Fried says that’s not a likely possibility.

“It’s a very big decision for him to nuke a country. I think we would have jumped the shark,” says Fried. “But in the first episode you will see him desperately trying to get his hands on the nuclear button.”

And alas, given that Big Macs are the president’s favourite food, there will be no cartoon McDonalds in the White House.

“I think McDonald’s might have something to say about that. But you will not be disappointed by how much our president eats.”

I ask Fried, who says his early animation influences were The Simpsons and South Park, if he’s not concerned whether real-life buffoonery in the White House will surpass any kind of cartoon buffoonery he can dream up.

“Of course, that’s already going on. Our job is to kind of put a filter and make some sense about it.”


The show will examine the relationships the president has with his family, the people in his periphery such as his golf caddy, and his cabinet in a kind of dysfunctional workplace and family drama show.

Trump’s family will make appearances, including his two sons Don Jr. and Eric who are likened to Beavis and Butt-Head.

“Donald Trump is a human being and there have been many shows based on people who are not perfect heroes. He’s probably a little less perfect than most,” says Fried. “But I think one of the prevailing themes you will see is that Trump tries to outdo everyone, including Canada.”

Indiana native Fried is no stranger to Canada. A lacrosse and hockey star at Harvard, his college line mate was Toronto Maple Leafs centre Dominic Moore, and Fried himself was a draft pick in 2000, for the Florida Panthers, before he became a comedy writer for stars like David Letterman, Jon Stewart, and Sacha Baron Cohen.

“I think (Fire and Fury author) Michael Wolff stole all ten of our episodes to write that damn book of his,” Colbert told critics. “Because there’s nothing in that book that’s not in our show. And we just guessed.”

As for not calling the show simply The Trump Show, Fried says the Trump name is trademarked across television.

Plus, if the show lasts into the next term, they’re all set up for the next cartoon president.