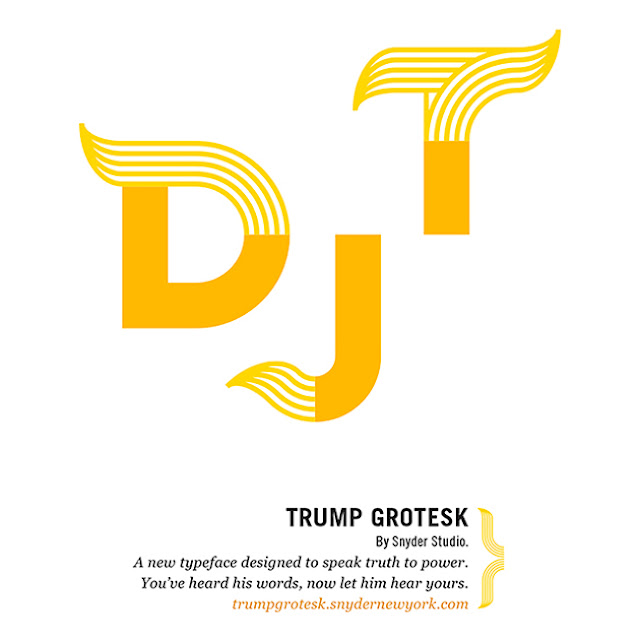 Trump infects the body politic’s mind to such a degree that now we even have a typeface in his image.

Snyder/Studio designer Mattias Mackler created Trump Grotesk to remind us of some of the truly grotesque things he’s said, done and will do.

I asked John Foster and Gary Cunliffe why they want to even give Trump an iota more attention, even as comedy and satire?

First and foremost, why do a Trumpian font? As a joke? As a satire?

Trump Grotesk came about as part of a launch campaign for our illustration sister agency opening a London office. President Trump is as much a controversial figure in the UK as is here stateside, so it felt right to amplify the popular culture already attached to him.

The obvious solution was to generate a series of posters and social media posts demonstrating the roster of talent. However, that was soon dismissed as the limited media budget might mean they would get lost in the sea of content pollution. That’s when we began playing with the idea of a font.

But as the concept began to manifest itself, it became clear we were attempting to do something bigger than just creating some hype with a font. Here was an opportunity to speak truth to power and begin recording those different truths with the ultimate goal of producing a pretty unique history book.

Do you think, as funny as it is, it gives undue attention to the man?

The overall idea was never intended to be ‘funny’, unless you think the 45th President of the United States of America denigrating women, minorities, refugees, allies etc. is funny.

Having said that, we can’t deny the family of fonts was crafted by taking tongue-in-cheek visual cues from the President – the top of the font resembles the trademark hair and the bottom of the font represents his equally iconic orange skin tone. 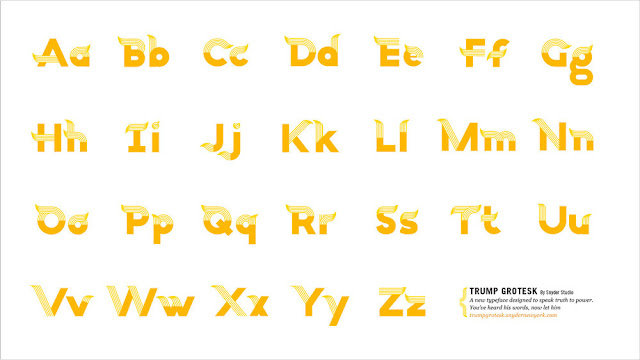 Our intention was never to bring attention to the man; he does an undeniably good job of that all by himself – but rather to his inflammatory oratory. Words are important, especially those from the leader of the free world, and this was an attempt to balance the rhetoric.

We wrote a deliberately unprovocative line under each Trump quote that reads, “You’ve heard his words, now let him hear yours” and directed the audience to trumpgrotesk.snydernewyork.com to respond in any way they wished without a partisan news filter.

Who is the font for?

How has it been received?

There has been an overwhelmingly positive response to the launch on both sides of the Atlantic with our target audience, with great interest in both Snyder New York’s artists and Snyder Studio’s ability to develop creative content.

And with the countless thousands who have responded so far, it’s fair to say that there has been a split between positive and negative responses that pretty much parallels that of the President’s approval rating.

What are some other fonts you’ve designed?

Snyder Studio is a media-neutral content company so Trump Grotesk was created as a means to an end, not as a design exercise. We were indebted to the collaborative typographic skills of Snyder New York’s Mattias Mackler and his creative partner, Pete Barnett, who helped bring the font to life.
Published by Bado at 6:25 AM