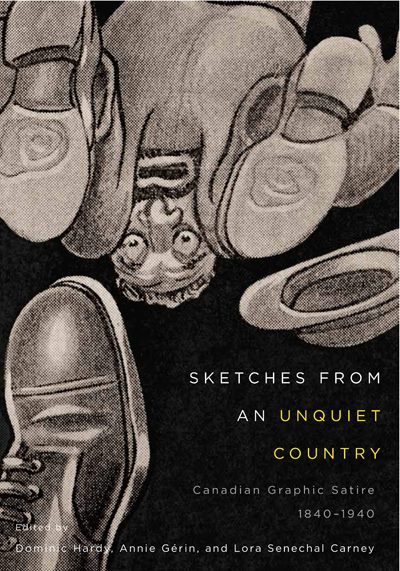 Graphic satire in Canada - from rebellious colony to independent nation preparing for war.

Canadian readers have enjoyed their own graphic satire since colonial times and Canadian artists have thrived as they took aim at the central issues and figures of their age.

Graphic satire, a combination of humorous drawing and text that usually involves caricature, is a way of taking an ethical stand about contemporary politics and society.

First appearing in short-lived illustrated weeklies in Montreal, Quebec City, and Toronto in the 1840s, usually as unsigned copies of engravings from European magazines, the genre spread quickly as skilled local illustrators, engravers, painters, and sculptors joined the teams of publishers and writers who sought to shape public opinion and public policy.

A detailed account of Canadian graphic satire, Sketches from an Unquiet Country looks at a century bookended by the aftermath of the 1837-38 Rebellions and Canada’s entry into the Second World War.

As fully fledged artist-commentators, Canadian cartoonists were sometimes gently ironic, but they were just as often caustic and violent in the pursuit of a point of view.

This volume shows a country where conflicts crop up between linguistic and religious communities, a country often resistant to social and political change for women and open to the cross-currents of anti-Semitism, xenophobia, and fascism that flared across Europe and North America in the early twentieth century.

Drawing on new scholarship by researchers working in art history, material culture, and communication studies, Sketches from an Unquiet Country follows the fortunes of some of the artists and satiric themes that were prevalent in the centres of Canadian publishing.

Uncle Sam, a Not-So-Distant Cousin: Canadian Contributions to the Genesis of a US Allegorical Figure
Christian Vachon

Crossing the Line: Canadian Satire of the “Pretty Girl” North and South of the 49th Parallel
Jaleen Grove