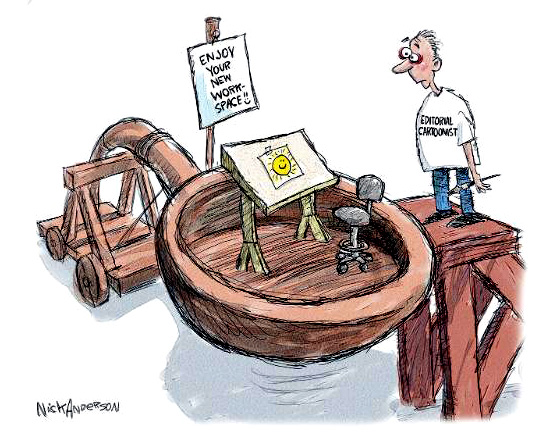 Every once in a great while, American readers experience a rare moment of collective awareness about editorial cartooning -- in the aftermath of the Charlie Hebdo massacre in France and the Mohammed cartoon controversy in Denmark, for example, when the loss of life and violent demonstrations forced the world to take note.

And now, in a different register, there is the Orwellian firing of Pittsburgh Post-Gazette cartoonist, Rob Rogers, after a 25-year career, for doing cartoons critical of President Trump.

Certainly these events are not equivalent, but for a cartoonist like me, they stand out as the events involving my profession that cause America to pause and take notice.

As with so many other outrages, America then usually goes back to sleep and pays little attention to the existential threat to editorial cartooning unfolding under their noses.

A number of Americans are justifiably outraged by Rob's firing (disclosure: we're friends). It's a form of censorship. Rob's firing occurred after what he described to The New York Times as months of pressure from his editor.

"When I had lunch with my new boss a few months ago, he informed me that the paper's publisher believed that the editorial cartoonist was akin to an editorial writer, and that his views should reflect the philosophy of the newspaper," according to him.

There were 19 cartoons killed in that span -- six in a single week. Rob went public on Facebook that week after the fourth one -- an image of someone in a Klan outfit asking a doctor, in a reference to Roseanne Barr's attempt to explain her racist tweets, "Could it be the Ambien?" -- was killed. 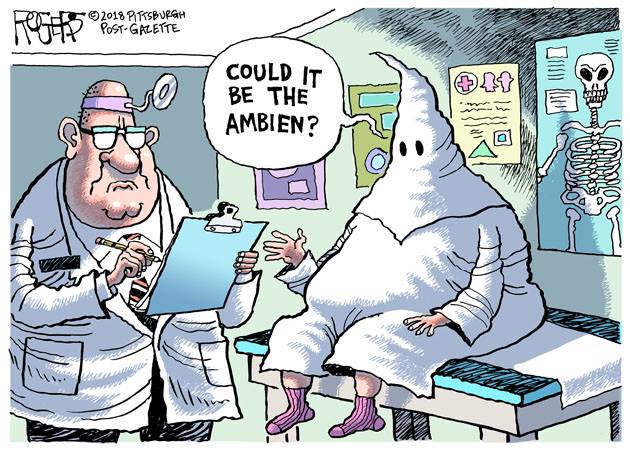 I was actually the first one to comment -- "That was killed??" I could see absolutely no rationale for killing that cartoon.

Given the context of Roseanne Barr's tweet about Valerie Jarrett - an African-American woman who was a senior adviser to President Barack Obama -- the cartoon showing a KKK member blaming his racism on "Ambien" was completely within the bounds of fair commentary.


I called him a few days later to express concern about his job security.

Getting a string of cartoons killed is generally not a good harbinger of things to come, and going public with it is a risky gambit. But, there is absolutely no reason to be an editorial cartoonist if you don't have the opportunity to express yourself.

That's the whole point of being a cartoonist. His situation was clearly growing intolerable. He was right to go public.

But what's missing from the situation is the outrage for the quiet firing of over 100 cartoonists around the country over the past few decades.

The generally accepted number by the Association of American Editorial Cartoonists is that there were about 180 staff cartoonists three decades ago.

Now there are fewer than a couple dozen. My state, Texas -- the second-largest in the Union -- doesn't have a single full-time cartoonist.

Newspapers get tired of the controversy that a full-time cartoonist can cause.

A staff cartoonist is someone who works as a salaried employee, much like a reporter. A syndicated cartoon is distributed to hundreds of papers by a news service.

Editors get tired of the complaints from readers. But those firings could easily have been masked as layoffs, especially since syndicated cartoons are far less expensive.

It's harder to kill a cartoon from your staff cartoonist -- like a writer would, they complain.

They fight back. They have a voice that they can raise with you in person.

It's easier to kill a cartoon from a syndicate. You just quietly discard it in favor of a less controversial cartoon. The power to select content is also the power to stifle content.

So, if you're feeling outraged about Rob Rogers, you're not alone -- the Post-Gazette's union reporters and non-unionized editors took out ads in their own paper distancing themselves from their publisher as a result.

You can do something, too. You can ask yourself this: does your local newspaper even have an editorial cartoonist?

If they do, let the editors there know how much you appreciate their work.

If not, ask yourself why not and what those editors might do if they found themselves in the same position as the ones at the Pittsburgh Post-Gazette.

Your local paper is likely breathing a sigh of relief. They are currently being spared the PR nightmare that the Post-Gazette is experiencing because your local paper quite likely banished their editorial cartoonist years ago.

American newspapers aren't likely to suddenly reverse course and start hiring cartoonists back, and digital outlets' commitment to cartoons is uneven at best.

Generally speaking, publications' propensity for self-reflection is heavily dependent on what their readers demand.

Do the web publications you read have cartoonists? I

f you like editorial cartoons, and if you share them on social media, ask yourself, where they are going to come from in the future?

Contact the publications you read and make a suggestion.

When Richard Nixon ran for president, he reportedly groused about Herblock, The Washington Post's famous cartoonist, "I have to erase the Herblock image." Nixon resented the dark shadows Herblock drew under his eyes and face.

Herblock observed that Nixon had a ''moral 5 o'clock shadow.'

These, and hundreds of other editorial cartoonists, have been holding politicians accountable for America's entire history.

In fact, they are a part of our history.

What happens when all the cartoonists are gone? I'm afraid we are on the road to finding out.

Nick Anderson is a Pulitzer Prize-winning cartoonist who was laid off by the Houston Chronicle in 2017.
Published by Bado at 12:00 AM