Bruce Campion-Smith in The Toronto Star.

For those who missed it, the comic depicted a Black person wearing a mask and a t-shirt with the saying “I can’t breathe” written on it. A blue-eyed white woman beside her says, “If you can’t breathe, then take that silly mask off!”

The public editor inbox started to fill with complaints that the single-frame comic was offensive on two critical issues of the day — the pandemic, and diversity and the fight against racism. There were questions how it ever saw the light of day in the Star and demands for an apology.

Most complaints charged that the comic demeaned Black people and the Black Lives Matter movement, which has taken on fresh urgency since the May death of Minneapolis resident George Floyd.

Floyd, a Black man, was handcuffed and dying as a white police officer knelt on his neck for almost nine minutes even as he repeatedly gasped, “I can’t breathe.” The officer was fired and has been charged with murder.

Readers also criticized what they saw as the comic’s flip response to public health advice to wear a mask to curb the spread of COVID-19.

“Today’s Six Chix ‘cartoon’ was absolutely the most tasteless, ill-informed and racist illustration that I have ever seen in the Star,” wrote David Coates, of Toronto.

“I read the comics and felt the cartoon by Six Chix was completely inappropriate and was certainly negative towards both Covid safety and Black Lives Matter,” wrote Kathy Fearn, of Markham. “It was appalling to see both issues being ridiculed so obviously.”

And a reader from Caledon wrote, “It is an attack, not humour or satire, on both public health and the rational movement to end racial discrimination.”

There were many more, but you get the idea.

I’ll admit my first reaction to the comic was one of puzzlement and dismay too.

But what if we all missed the point? What if the ignorance and insensitivity of the woman not wearing the mask and her glib response was the artist’s intended message?

Six Chix is the work of six women cartoonists who each draw once a week and take turns for Sunday.

Tuesday’s cartoon was the work of Bianca Xunise, an African-American cartoonist and one of only three Black women who are nationally syndicated in the U.S., according to King Features, distributor of the strip.

I reached out to Xunise via her agent hoping to chat. I was told she wasn’t available but Tea Fougner, the editorial director of comics for King Features, told me that Xunise meant the comic to be a “joke commenting on how Black issues are often disregarded as a personal problem and not a systemic issue.”

Xunise herself took to Twitter to explain the comic because, “everyone has been getting it wrong.” 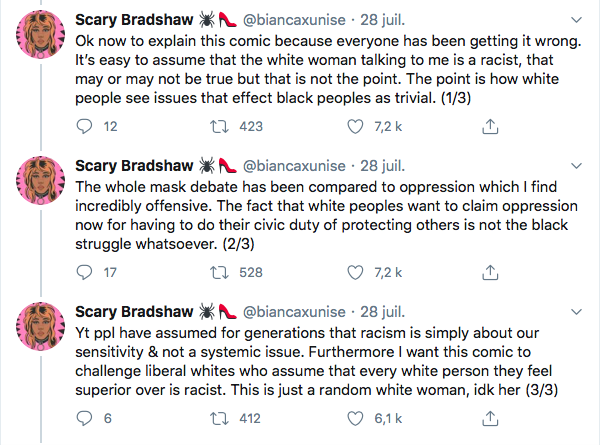 I passed Fougner’s statement to the readers who had raised concerns. For some, the explanation helped. “I too have now had a chance to rethink my opinion on it, and I agree it was a reflection of what’s happening these days; sad,” replied one reader.

But for others like Coates, the comic still fell flat. “Run this past a dozen Canadians and I think 10 would find it as meanspirited and racist as I did. Pray tell where is the punchline?” he said in a follow-up email.

It was certainly a moment when everyday life found its way into the “funnies.” Instead of prompting a chuckle, it prompted some reflection on assumptions, viewpoints, and the conversations we need to have.

Interesting too, because it wasn’t an editorial cartoon, where the very purpose is to use pointed caricatures to persuade and provoke. Readers know those cartoons are likely to be edgy.

Rather, Six Chix is found in the comics section. Packaged with the puzzles, this corner of the newspaper is meant to provide readers with an entertaining diversion to the day’s routines.

On this day, one cartoon packed a punch we weren’t expecting.

"'I am being silenced over white feelings from a gag comic': Black comic artist on her work being pulled from newspapers" on the NBC website.