Solo Exhibition for Liza Donnelly at the Norman Rockwell Museum 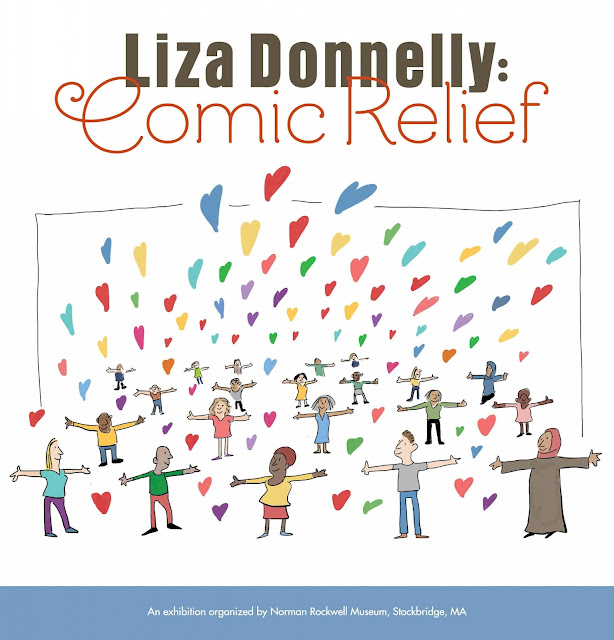 In the first-ever retrospective exhibition of Liza Donnelly's work, visitors of the Norman Rockwell Museum can explore her hand-drawn lines that are a means of examining the way we live our lives, finding common ground, launching political movements, or calling leaders into account.
An accomplished cartoonist, with more than 40 years at The New Yorker, a writer, children's book illustrator, and visual journalist, Donnelly believes that humor can open the door to new ways of seeing, connecting us in ways that words alone cannot.
Donnelly's incisive and delightful cartoons and visual essays are inspired by the world around her.
They have been featured in The New Yorker, The New York Times, Ms. Magazine, CBS News, NBC, CNN, Forbes, Fusion, Medium, Narrative, Politico, The Daily Beast, Salon, The Huffington Post, and Glamour, among others.
She is the creator of live digital drawing and she has spoken internationally and at the United Nations on behalf of Cartooning for Peace.

This exhibition explores the organic evolution of Donnelly's desire to express herself and to engage with the world through drawing, tracing her transformation from a painfully shy child growing up in Washington, D.C. to her emergence as a New Yorker artist and activist.
"The artist's humorous, buoyant drawings provide much-needed comic relief in uncertain times, and we are honored to celebrate her exceptional and memorable accomplishments" says NRM Chief Curator and Deputy Director Stephanie Plunkett.
The artist remarked on the importance of her first comprehensive exhibition being debuted at Norman Rockwell Museum.
"Even though on the surface our work is very different, I have an artistic connection to Norman Rockwell. I admire how he expressed his social activism in his work, his apparent desire to "speak" about culture and reflect life, the good and the bad.
I try to do that in my work as well, using my art as a way to shine a light on issues and open up a dialogue. Art can connect with people in a way that words often cannot.
I always say art speaks to the heart and mind; it can bring people together and prompt them to think in ways they may not have before, to think about themselves and the world.
Rockwell's work certainly did-and continues to do that. I hope mine does the same."

The Artist as a Young Cartoonist
As a quiet child who loved to draw, Liza Donnelly found that cartoons helped her to communicate and to share her observations of the world with family and friends.
Art gave her a platform to express herself and more importantly, it made her mother laugh. Her father, a physician, was often working, and her sister was a rebellious child.
"I thought it was my job as the younger, quieter daughter to make my mother happy."
A book of cartoons by American illustrator James Thurber -a gift from her mother- offered a glimpse into the possibility that being a cartoonist was an option. "I became the artist in school, drawing my friends, drawing people, and that's where my love of cartooning started."
Included in this section are examples of Liza's childhood and teen drawings, a charming letter and Snoopy memes sent to one of her idols- Charles Schultz, and a sampling the early rejection letters she received from The New Yorker -as well as her first accepted cartoon for them. 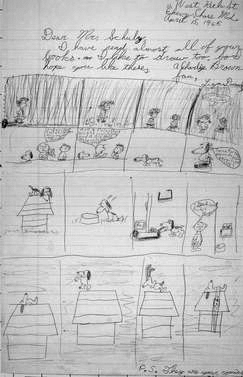 All for Love
Love, marriage, divorce, sex, and parenting have been ongoing themes in Liza Donnelly's art, perhaps with good reason.
She has been married to veteran New Yorker cartoonist Michael Maslin for more than 30 years, and their cartoons reveal the humor and pathos in relationships from both a male and female perspective.
The challenges of co-habitation, communication, and child-rearing invite Donnelly's hilarious perspectives on the way that relationships work, or sometimes fall down on the job.
Cartoon Marriage, a 2009 book that Donnelly and Maslin collaborated on, is a comedic inside look at life's small moments and the complications inherent in loving relationships. 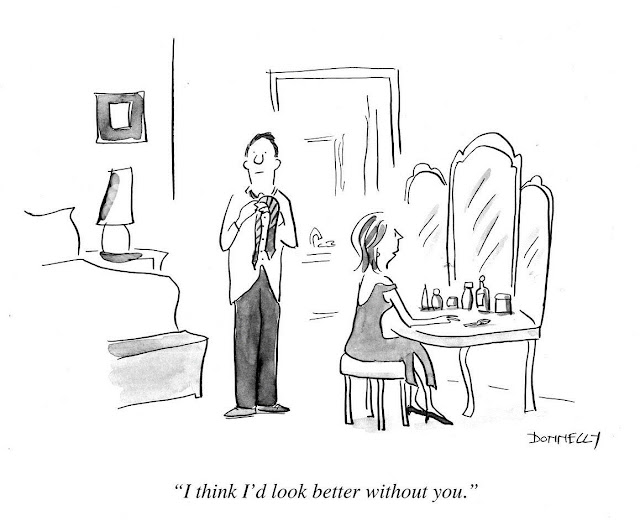 "We weren't sure if it would damage our marriage," she said, "but it probably brought us closer together because we had a lot of cartoons about marriage to start with.
Laugh out loud cartoons on these themes engage viewers through her savvy wit on everyday, highly-relatable encounters. Her spare, simple lines masterfully communicate stories, emotions, and feelings.

When Donnelly was in college, the second wave of feminism was in full swing, and though she championed equal rights for women from the start, she explains "I didn't think I was a feminist cartoonist-I just wanted to be a cartoonist."
While working at The New Yorker, she realized that there were very few women drawing cartoons, and that female artists could offer unique and meaningful perspectives.
Tina Brown, editor of The New Yorker from 1992 to 1998, especially appreciated Donnelly's work. This helped to foster Donnelly's humorous voice as a woman and inspired her to view cartooning as a means of bringing sexism and other feminist concerns to light.

The subject of equality and women's rights at work, at home, in society, and around the globe remains a significant theme in her work today.
Her books Funny Ladies: The New Yorker's Greatest Cartoonists and Their Cartoons (2005) and Sex and Sensibility (2008) highlight the contributions of noted and lesser-known female visual humorists.
Original images from her book as well as cartoons for numerous publications are presented in this section. 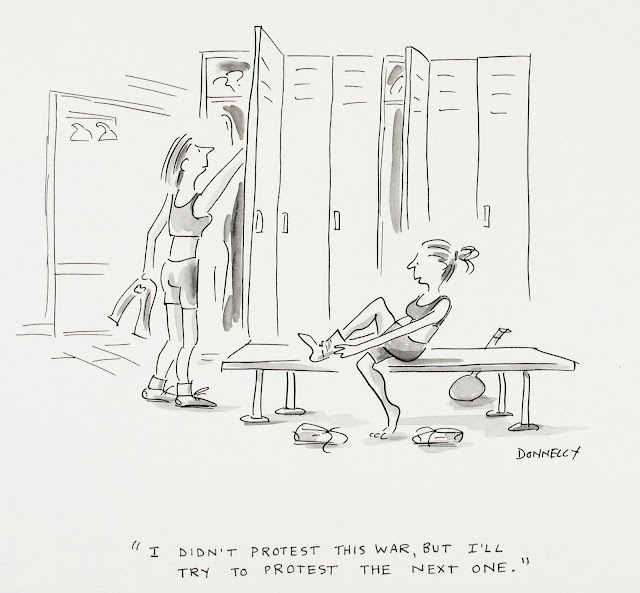 The Museum's ability to collaborate and organize this special exhibition in short order, as necessitated by the pandemic-offers visitors a chance to view very current work by Donnelly.
In the following two sections; her more recent pieces expound on her growth and virtuosity as an artist and visual commentator, upon shifting her attention to matters of national and global importance.

Following 9/11, like many artists, she found her voice and dedicated herself to circulating cartoons focused on the political landscape.
Though she has a particular political viewpoint, she avoids strident negativity and starts a conversation.
Still, Donnelly feels that it is important for political cartoonists to scrutinize elected officials and to hold them accountable, an artistic tradition that is centuries-old.
Exhibited here are poignant examples from the pages of The New Yorker and other news outlets, both print and digital; including more recent views on the current political figures. 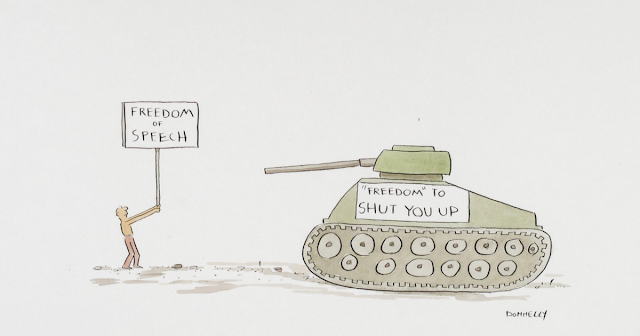 Cartooning for Peace
Cartooning for Peace was launched after the 2005 Jyllands-Posten Muhammad cartoon controversy, which led to violent protests around the world.
In questioning the editorial cartoonist's role, French artist Jean Plantu imagined Cartooning for Peace and brought it to the attention of United Nations Secretary-General Kofi Annan.
On October 16, 2006, Unlearning Intolerance-Drawing Peace, a seminar organized by Plantu and Annan, was held at the UN, and Donnelly was one of twelve international cartoonists invited to participate.
A fan of the medium, Annan said, "I have always thought that cartoons are one of the most important elements in the press. They have a special role in forming public opinion-because an image generally has a stronger, more direct impact on the brain than a sentence does, and because many more people will look at a cartoon than read an article."
Today, more than 150 artists are members of Cartooning for Peace.
"We use our craft to talk about global issues and how cartoons can be used to inspire dialogue and understanding-how they can be used for good," said Donnelly, who helps to jury the organization's global cartooning awards, which are presented every other year. 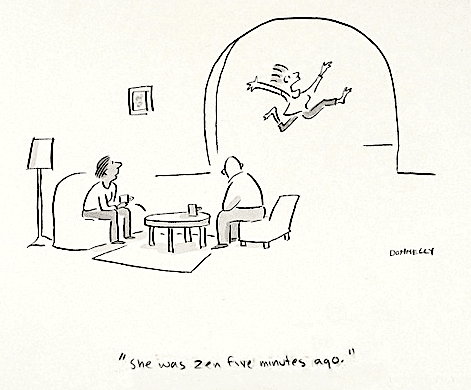 Living through COVID-19
Literally taken off the artist's drawing board, a few weeks ago, Museum Curator Stephanie Plunkett gathered the newest work from Liza Donnelly's studio in nearby New York State.
Properly distanced, masked and gloved, Museum staff worked with Donnelly to select the best of her timely and relevant cartoons that would be meaningful for visitors still navigating the ongoing crisis.

An insightful and close observer of the impact of COVID-19 on the lives and psyches of the American people, Liza's cartoons on the subject are both poignant and funny, depicting the lives of everyday citizens who are trying in their own way to cope with a challenging situation.
"This is what cartoonists do, we comment upon what's going on in life, and so the pandemic is life now," she observed. "I've had to draw a lot of people wearing masks." 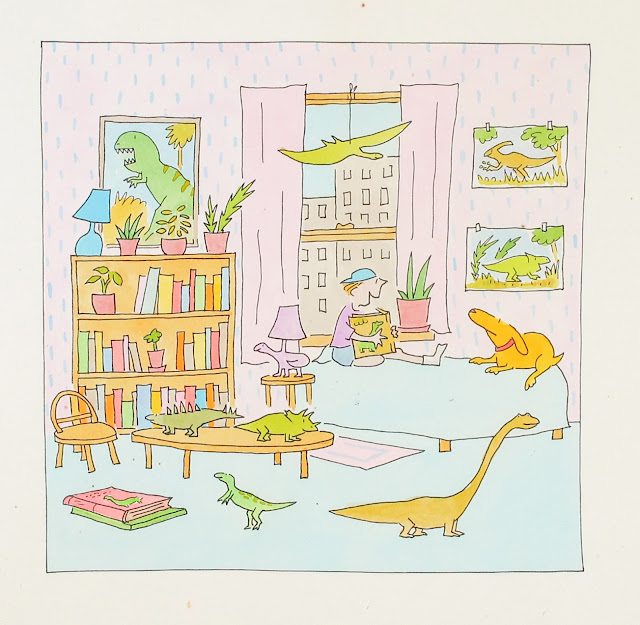 The Art of the Picturebook

In the 1980s Donnelly create a mockup of a book concept inspired by the monsters she drew as a child.
Editors at Scholastic asked if she might turn her imaginary creatures into dinosaurs. In 1987, Dinosaur Day launched a series of seven books about a little boy and his dog with a fascination for prehistoric animals and a love of adventure.

Donnelly found children's books to be an enjoyable respite from the news and world's realities, which more directly inspire her cartoons. Bright and colorful, her books have minimal text, with narratives that are propelled forward by the fun-filled experiences of her endearing characters.
Dinosaur Halloween, Dinosaur Thanksgiving, Dinosaur Beach, The End of the Rainbow, and A Hippo in Our Yard are among her many books for young readers.

Liza Donnelly is passionate about live digital drawing, which allows her to capture and share the immediacy of any moment, whether on location or from her living room.
Five years ago, she received the gift of an iPad and explored its possibilities. "I was watching a State of the Union address on television and began drawing [on the iPad], sending out each sketch on Twitter."
Public response was enthusiastic and positive, "the drawings were loose, bold, and colorful-impressions of the people in the room and the President himself."
Digital drawing soon became a way for Donnelly to converse with people through social media, and the art form has become an important and enjoyable aspect of her career. 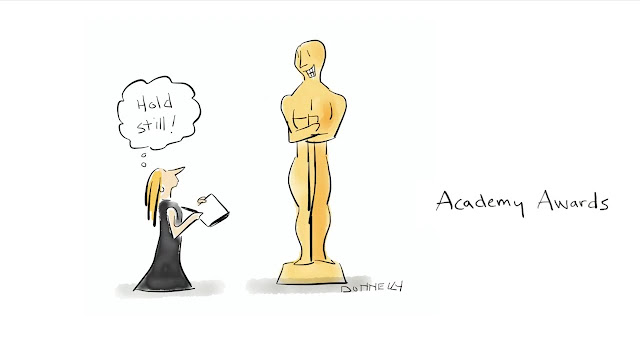 CBS and CNN have hired Donnelly as a visual correspondent at the Oscar, Grammy, and Tony Awards; she has also covered the Democratic National Convention and the Women's March on Washington.
Each evening at 5 p.m./EST on Instagram, she draws and narrates her impressions of the events of the day. "It's so fluid," she said. "I love the feel of a pen on paper, but I like the immediacy of digital drawing and love sharing it with people."
The Museum presents her digital drawing through a curated selection on video in the gallery.
Liza Donnelly: Comic Relief
Norman Rockwell Museum
Published by Bado at 12:00 AM