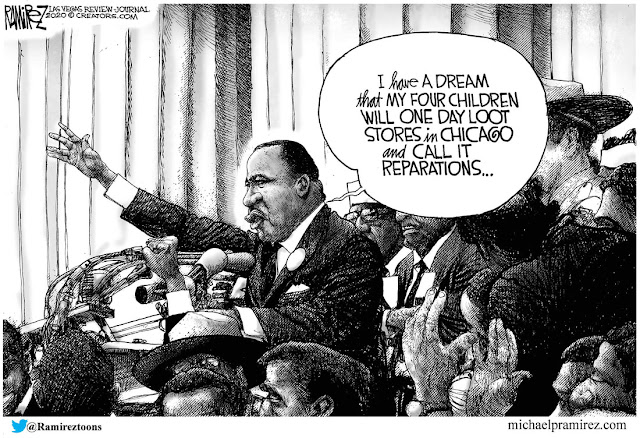 A Michael Ramirez cartoon that appeared in the Sunday edition of the Southeast Missourian newspaper is being criticized as racist.
It depicted King with exaggerated facial features saying, "I have a dream that my four children will one day loot stores in Chicago and call it reparations."
The newspaper, owned by Rust Communications, published a note to readers Thursday by its opinion page management, saying that in response to the cartoon, "The Southeast Missourian has been the recipient of a wave of social media messages, emails and threats."

The management statement also defended the sketch as among cartoons with a broad range of viewpoints that the newspaper has been publishing regularly.

Two letters to the editor published Thursday slammed the cartoon, with one saying the paper had dishonored King's legacy.

"I am disappointed, and frankly, disgusted, that you and your editorial board would choose to publish the Ramirez cartoon depicting MLK Jr. scolding protesters along with ridiculing the idea of reparations,"

"It totally dishonors the civil rights icon and blatantly sends a racist message, 'Stay in your place, or you will disappoint MLK.' What fictional nonsense."

"More than ever, we need racial unity in our communities, not an editorial message that can fan the flames of racism,"

Christine Warren, who said she is a subscriber to the paper, wrote.

Another letter writer, Tom Preston, who said he is a longtime reader of the paper, called the cartoon "disrespectful."

"The mayor of Chicago has just this morning on 'Face The Nation' said that the looting and destruction of the high end stores in her city were done by a coordinated group of criminals, not peaceful protesters.

This cartoon isn't even overtly racist, it is blatantly racist. We as a society are better than this and you should be too!"

The response by the paper's opinion page management said the drawing by political cartoonist Michael Ramirez was based on an actual quote, as it "alluded to pro-looting words spoken by a Black Lives Matter organizer after recent riots in Chicago."

As reported by National Public Radio, the protest's organizer, Ariel Atkins, said that she did not see a problem with looting because people in the city are struggling.

Chicago Mayor Lori Lightfoot was also quoted in the article saying that there is a difference between protesting and looting.

"These were not poor people engaged in petty theft to feed themselves and their families. This was straight-up felony criminal conduct."

The Southeast Missourian's written response said the sketch was not an attack on King but "pointedly surfaces the question whether looting and violence are in the spirit of MLK's legacy.

An email to Ramirez seeking comment Thursday did not receive an immediate response.
The paper's publisher, Jon Rust, referred NBC News back to the note to readers.
Published by Bado at 12:00 AM