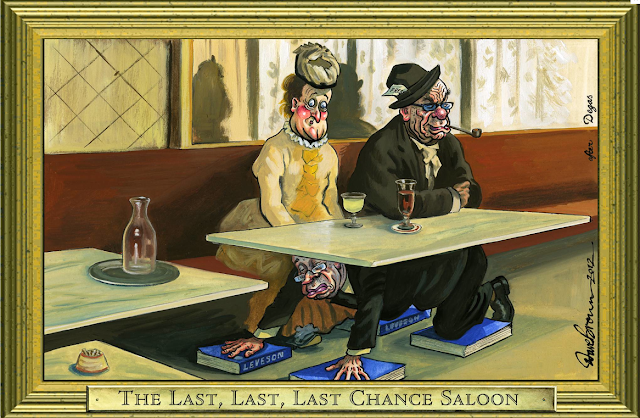 A cartoon by The Independent's Dave Brown has been named Political Cartoon of the Year 2012.
The cartoon,  'The Last, Last, Last Chance Saloon' (above) was published in last Saturday’s paper, and shows David Cameron's response to Lord Leveson's report. The cartoon was inspired by a painting by Degas.
The award, presented annually by the Political Cartoon Society, was voted for by the society's members together with the cartoonists of all the national newspapers in a ceremony at the Ellwood Atfield Gallery in Westminster's Smith Square on Tuesday night.
Dave Brown has previously won the Cartoon of the Year Award in 2003, 2006, and 2010.
Click here to view a gallery of Dave Brown's cartoons for The Independent
Published by Bado at 12:40 PM