Seth on the end of Bazooka Joe Comics

Topps recently announced the discontinuation of its long-running Bazooka Joe comic strip, since 1954 a popular addition to its bubblegum packaging.  The strip has a storied history (ironically the subject of an upcoming celebratory book from Abrams ComicArt, Bazooka Joe and His Gang: A 60th Anniversry Collection). For many years the gags were written by Underground comics legend Jay Lynch and drawn by former Tijuana Bible cartoonist Wesley Morse. According to The New York Times, the gum company executives have decided to rebrand, reducing the iconic character to the role of occasional spokesperson/mascot, stating, “What we’re trying to do with the relaunch is to make the brand relevant again to today’s kids.”
Sequential asked cartoonist Seth, creator of the Jocko gum-machine giveaway comic, and a Bazooka Joe collector of long-standing, to comment on the news. 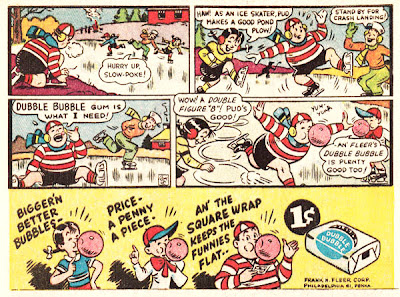 “Contrary to popular opinion, I am NOT more of a Pud fan than a Bazooka Joe fan (though Pud had his charms as well)! Bazooka Joe is definitely my favourite of the two. However, that said, when I heard that Topps was discontinuing the little comics in the gum I mentally shrugged. “Who cares?”, I thought. They killed the real Bazooka Joe decades ago anyway. Whatever modern version is currently being given away with the gum is surely some sort of abomination (I’m assuming). Still, some part of me felt kind of disappointed to hear it. One less anachronism in the world. Even if those little modern comics are utterly horrible ….it’s still sort of charming that today’s kids were unwrapping their gum and reading a comic strip for one second before they balled it up and tossed it away and turned back to their electronic distracter. A minor continuity of childhood stretching back to the mid 20th century, I s’pose.

Truthfully I wish there were a lot more of these sort of things in the world. Why didn’t every candy company put a comic or gag cartoon in with their product? Why didn’t Cracker Jack put a whole little comic book into the box in their heyday (a disappointing comic book where every page would’ve been accidently glued together by molasses and caramel corn)? Those tiny Bazooka Joe comics were such a great little marketing tool and I always thought that Topps was fairly brilliant to have thought up the idea.
Though thinking about it –I’m ashamed to admit it I’m not sure who came up with it first. Was it Fleer or Topps? Either way– a smart, sweet little idea. Innocent almost. I cannot imagine why Topps would bother discontinuing the only element of their gum that makes it worth buying? But then, it’s the classic kind of stupid business move that “clear-cutting” pop-culture businesses make all the time. They don’t recognize something interesting in their midst until they have ruined it. Look to the entire history of mainstream comic books to support this statement.
I must say, I always deeply enjoyed the poor quality of the old Bazooka Joe strips. There was something inherently odd about those strips and that tiny world of the characters. They seemed to take place just around the corner from some better kid strip –like Peanuts or maybe Little Lulu. Just over on the other side of the fence where the world was still vaguely 1930′s. A neighbourhood where the people never digressed in speech because they were only allowed 3 words per balloon (less in their Canadian neighbourhood since they had to squeeze in a French translation as well!).
So many of those waxy comics passed through your little hands as a child and yet you never really had any sense whatsoever of who those characters were. They all seemed like bit players. As often commented –the only elements remembered about them were their oddities. Joe’s eye patch, Mort’s sweater, Percy’s cowboy suit and Herman’s obesity. The little girl (Jane?) was memorable only because she was the only girl (at least the only one I remember). When I found out that the strip’s cartoonist was also a pornographer back in the 30′s I could not have been happier. It somehow made Bazooka Joe even more perfect.
Loving Bazooka Joe has always been about loving the IDEA of something. Little strips going out into the world wrapped around gum for little children. That’s great. Pure. Simple.


There really was nothing much else to love about it but the idea. I have hundreds of Bazooka Joe strips in a binder in my library. I’m never going to reread those. There is nothing to re-read. They exist as an object. An artifact of an idea. So, I guess I am sorry that this charming old fashioned idea is passing out of the charmless world we live in today. But as I said, they’d already wrung most of the flavour out of this thing 20 years ago (much like well-chewed gum) so I’m not crying about it either. Thank God Jack Chick is still passing out his classic-cartoon-styled hate literature on city benches. There’s so little of these ephemeral kind of oddities left in the world. One less now.”