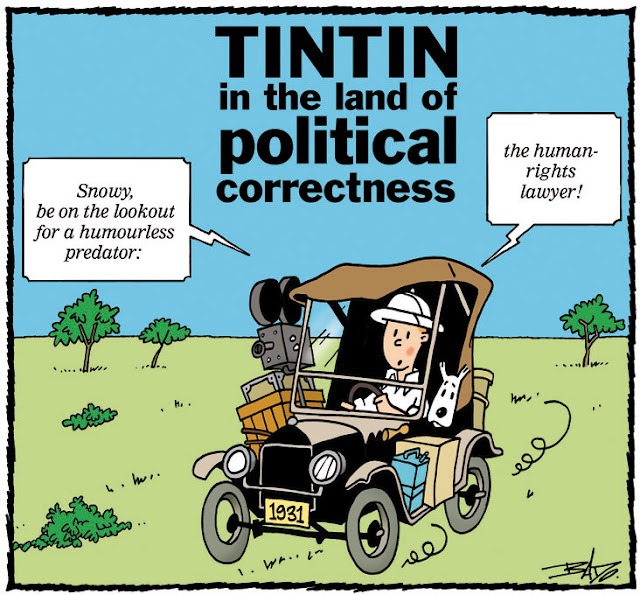 A Belgian court says the cartoon, which is sold in the UK with the warning it includes racist content, is "full of gentle humour".


Tintin in the Congo is not racist, but a story full of "gentle and candid humour", according to the Belgian Appeals court.

The second of Herge's adventures of the boy reporter and his dog Tintin features the character of a stupid black helper and a woman who at one point says: "White man very great."

The cartoon strip, which was written in the 1920s, is sold in Britain with the warning that it includes racist content, following a ruling in a British court in 2007.

However, the Belgian court rejected claims of racism and the argument that the book was full of negative racist attitudes that could still have an impact on children who read it today.

The appeal had been brought after a 2011 ruling which found that Tintin was not racist and should not be banned.

It was brought by a Congolese immigrant, Bienvenu Mbutu Mondondo, and the Belgian Council of Black Associations.

He said the book should be banned in Belgium, which has a history of colonial aggression, exploitation and violence in the Congo, because of the number of damaging black stereotypes.

He said that Tintin employed a little black helper who was seen as "stupid and without qualities".


"It makes people think that blacks have not evolved," he said.

Alain Amici, a lawyer for Mr Mondondo's group, told the court at the original case in 2011: "The negative stereotypes portrayed in this book are still read by a significant number of children. They have an impact on their behaviour."

Even Tintin author Hergé, whose real name was Georges Remi, admitted in later life that the cartoon strip was a "youthful sin" and reflected the prejudices of its time.

The group has also tried to have the cartoon banned in France, but failed.