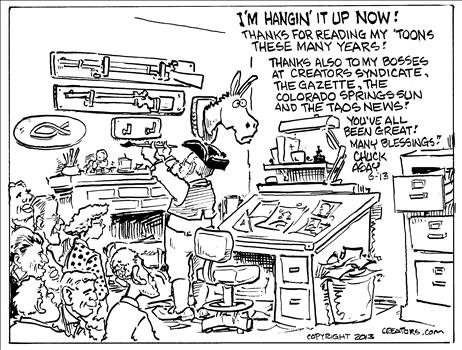 Asay stepped down from his post at the Colorado Springs Gazette in 2007, but continued to draw for Creators Syndicate until 2013.

He recently capped off his career by donating all his original cartoons, along with the publishing rights, to the Pikes Peak Library.

"The cartoons are in the process of being archived now," Asay wrote in an email. "It might take a few years to get everything up on site but you can find the ongoing work".

"My mom always taught us kids to leave a place just a little better than the way we found it. As I look at the issues I’ve visited in the past 30 to 40 years in my editorial cartoons, I’m finding almost everything has gotten worse. Sorry.

We have more government and less freedom. Addictions have grown stronger and families are weaker. There are still wars and rumors of wars. But it’s fun to look back and see how the more things change the more they stay the same.

In June of 2016 the Pikes Peak Library District had a show and a panel discussion about some of my more provocative cartoons.

I’ve given all my cartoons along with publishing rights to the Pikes Peak Library District in Colorado Springs. It’s a legacy thing. The folks at PPLD have graciously accepted the donation of my life’s work. We want to make it available to the general public.

You can also find some Asay interviews, demonstrations and programs by doing a search on your internet provider at Youtube.com and type in chuck asay or go to https://vimeo.com/81060486 to see a little cartoon story about Xmas.
Published by Bado at 12:00 AM