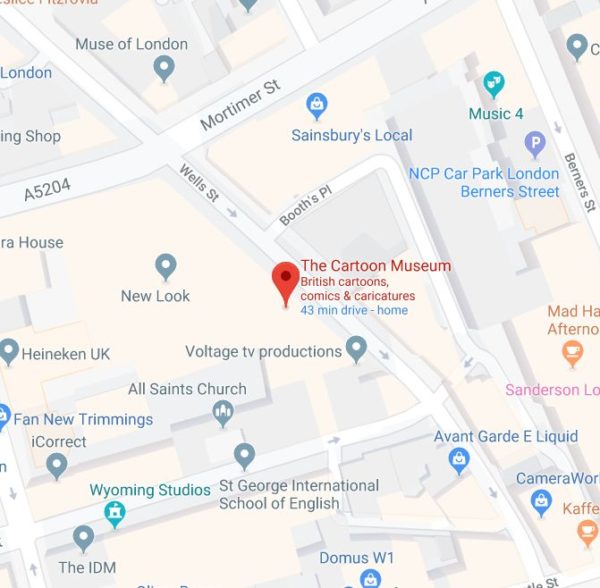 If you look on Google Maps on Wells Street in London’s West End, you’ll see the Cartoon Museum listed.

A jewel in the crown of the comic art scene, with amazing collections that often see visitors jaws drop.

The only problem is, that it isn’t there. It used to be round the corner of the British Museum, but closed that location in September.

And they only just managed to get Trip Advisor to take it off, with people still turning up, thinking it was still open.

Now they have the same problem with this new location, even though it won’t be open until April. That’s because it’s still being built.

And yesterday, I got to take a walk around with Alison Brown, Becky Jefcoate and Steve Marchant.

Well, it was either that or start a riot on the streets of Paris. 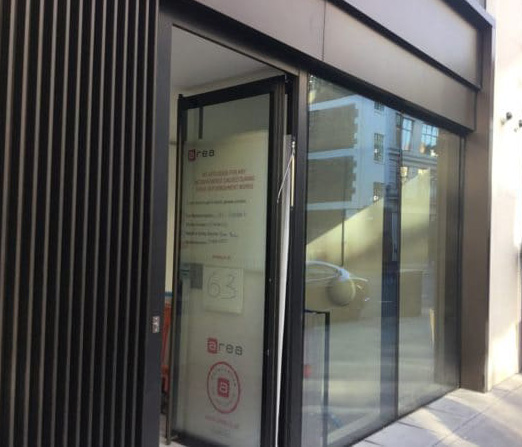 We start with the street of Wells, opposite Oxford Street from Gosh Comics, very close to BBC’s Broadcasting House, and in the same street that once housed London’s Sketch Club from 1903 to 1957, with the likes of HE Bateman being apologised to by everyone.

So, we go through the doors…and down the stairs, which will be covered in cartooning faces and ephemera.

The door will be a cartoony ‘smash’ burst, which will open up to a shop counter with the word HELLO in large friendly letters, and a bookcase wall that will open up to the rest of the museum.

The museum is going to be transformed – including a classroom that can actually take a whole class. 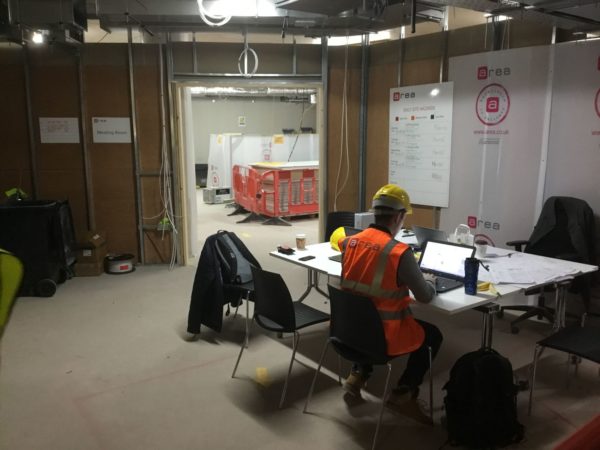 I know, radical concept, but this should really help with their half term activities as well.

A bigger space for permanent and temporary exhibitions, as well as topical pop-up areas and also moving into digital comic book displays as well.

And Steve Marchant will be able to show off what he has been acquiring for the last four years, buying original comic book art that would either have a) disappeared into private collections b) disappeared abroad or c) destroyed.

He’s been whittling down 400 pages to a 60-page display – including some favourites such as Watchmen and V For Vendetta, but also a lot of new work for display, including the likes of Ken Reid and Leo Baxendale, but some unseen since publication – if even then.

This means a rediscovery of forgotten British comics greats, some of whom even Stephen was unaware of. The museum will not only reflect British cartooning history but in some cases will rewrite it.

It’s very exciting, and the feeling was infectious.

The building is currently on schedule, expected to be finished in March, before he place gets fitted up, hopefully for an April launch. They are still fundraising to meet the full costs but things have been looking good.

Currently, the team are negotiating space in the University of Westminster buildings opposite. I understand that it’s slightly less labyrinthian than previously.

Still the new building will give them a little more space to store the necessary paperwork. 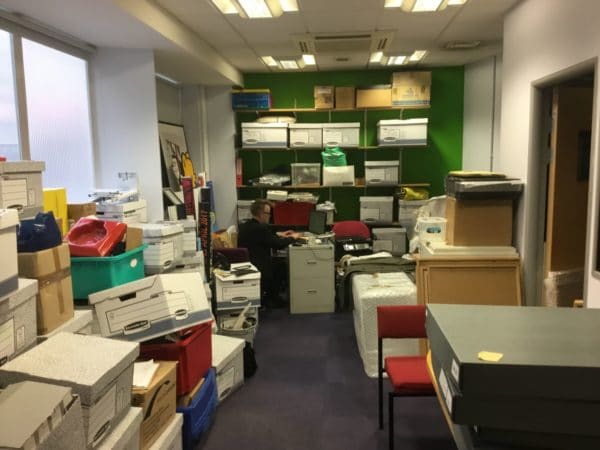 It all kicks off this April. They are currently looking to start going public with their plans next week for a big Grand Opening.

Bleeding Cool will be happy to follow wherever they lead.
Published by Bado at 12:00 AM