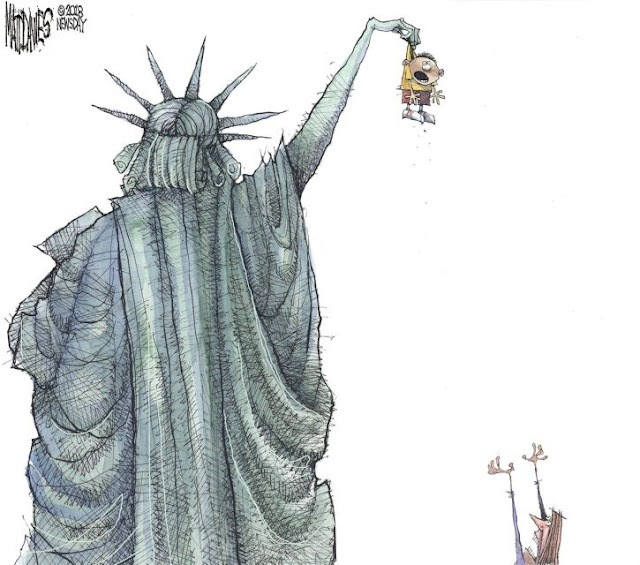 Newsday editorial cartoonist Matt Davies has been named the 2019 Herblock Prize winner — the first two-time recipient of the prestigious honor.


Davies, who has been at Newsday since 2014, also won the award in 2004, the same year he took home a Pulitzer Prize.

The Herblock Prize debuted that same year as a way to recognize excellence in editorial cartooning.

It was named after the late Herb Block, longtime editorial cartoonist at The Washington Post and himself a four-time Pulitzer Prize winner.

The most recent Herblock Prize, Davies said Wednesday, was unexpected.


“I’m in the business of upsetting people so usually when my phone rings, it’s people who are not very pleased with me,” he said. “The role of the editorial cartoonist is usually to provoke and mix things up. … So it was a nice surprise.”

The Herb Block Foundation announced Davies as the winner and Clay Jones, a cartoonist based in Fredericksburg, Virginia, the runner-up.

Davies will receive a $15,000 after-tax cash prize and a sterling silver Tiffany trophy in a ceremony set for May 2 at the Library of Congress in Washington, D.C.

Jake Tapper, CNN's chief Washington correspondent and himself a sometime political cartoonist, will deliver the annual Herblock Lecture at the ceremony.

Davies submitted 15 cartoons for the contest but said he couldn’t decide his favorite.

The Herb Block Foundation created the prize in 2004 "to encourage editorial cartooning as an essential tool for preserving the rights of the American people through freedom of speech and the right of expression" and it is judged by a panel of outside experts.