A review by Louis Jacobson in the Washington City Paper.

Considering how much the practice of politics—and the media—has changed over the years, it’s something of a surprise to realize how resilient the art of political cartooning has been. The Studio Gallery is mounting a “celebration” of American political cartoons, which proves to be a sprawling, occasionally inspired, but slightly scattershot endeavor.

The exhibit's strength comes from its telling of how Democrats and Republicans came to be portrayed as donkeys and elephants. The donkey was first used against President Andrew Jackson, referring to the biblical story of Balaam, and Jackson later appropriated the symbol for himself—though it took another 80 years, and a revival by the legendary Thomas Nast, to turn the donkey into the Democratic standard. (Nast periodically used wolves, foxes, seagulls, and tigers to represent Democrats; he also used elephants for Republicans but occasionally tried sheep.)

The show includes mini-collections of original art by the late Washington Post cartoonist Herblock, notably his classic, saggy-faced Richard Nixon, and by Kevin (KAL) Kallaugher (above) of the Economist and the Baltimore Sun. (Full disclosure: Because of my job in the media, I know KAL and a few other cartoonists in the show.) 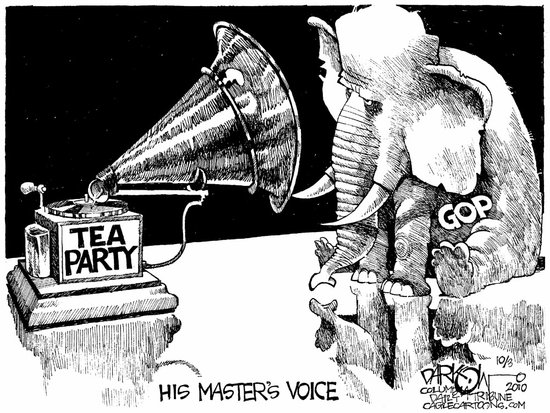 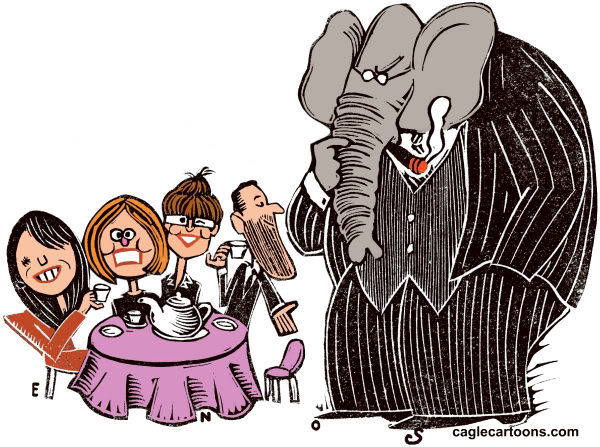 Compared to these old pros, the selection of works from Cagle Cartoons, a syndicate with many contributors, is much more uneven, with many examples that are too heavy-handed to be effective.

Though, a few individual cartoons stand out: a tessellated, rather Zen-like rendering of a donkey and elephant by Joel Pett, and Randall Enos’ visually distinctive, linocut-style images. But only one—in which a crazed elephant shouts to a jaded Alice, White Rabbit, and Mad Hatter, “I’ll show you a real mad tea party!”—is laugh-out-loud clever.

With a pitch-perfect take on John Tenniel’s original Alice illustrations, this one has the good manners to hat-tip its historical forbears.

Image courtesy Kevin (KAL) Kallaugher, the Economist and Kaltoons.com
Published by Bado at 4:00 AM