We have, friends, a string of thrilling announcements to make this January, the first of which goes like this: whiz-bang editorial cartoonist/animator Dan Murphy has joined Deep Rogue Ram as a contributor! Dan put together this week’s video, a lovely New Year’s Message from Stephen Harper:

Dan, a 29-year veteran of The Province newspaper, is perhaps best known for this video, produced in June 2012, in which gloppy piles of unwanted bitumen muck up an otherwise slick, uplifting ad for Enbridge’s proposed Northern Gateway Pipeline.


That video was yanked from the Province’s site, apparently under pressure from Enbridge itself. As Dan told CBC News at the time, the pipeline giant threatened to pull $1 million in ad money from the Province’s national parent chain, Postmedia. Enbridge denied it made any such threat, while the paper claimed the video was taken down over copyright concerns.

That debate became moot on November 23rd, when Dan tweeted “have been told this is my last cartoon for the province. adieu.”

We needed to know more. Here’s the interview he gave us in exchange for a Deep Rogue Ram decoder ring (available soon in the gift shop):

Deep Rogue Ram: So Dan, what happened at The Province?

Dan Murphy: Management axed the cartoonist job classification. Which, technically, lets them say they didn’t fire the cartoonists, they just fired their jobs. Every time they do say that, though, they owe Joe Heller a royalty.

DRR: To what degree do you think that decision is connected to the “Enbridge incident”?

Murphy: I really don’t know. I didn’t endear myself to Province brass going public about the paper pulling a web parody at the behest of a powerful advertiser.

And likely didn’t endear myself to the publisher when Dr. Robert Russell, with my endorsement, sent him a public letter to recount the responsibilities of a free press.

At the same time, the paper ran a subsequent Enbridge parody [ed note: this one is excellent] in which that company’s CEO had a buffoonish starring role. I think this was parody penance on their part. And I never had an Enbridge or pipeline/oil-tanker/tarsands related print cartoon killed before or after the parody yank.

The bigger picture is that a lot of Canadian newspaper brass, outside of Quebec, now considers political cartoonists expendable, whether it’s for ideological reasons, budgetary reasons or just to cut down on loose cannons that can’t follow the dress code.

When you see the Roy Petersons, the Vance Rodewalts, the John Larters, the Dale Cummings being shown the door — or the Bob Kriegers getting told that they’ll no longer be doing cartoons — that’s the loss of some important journalistic voices, with no one being brought in to replace them. [ed note: Sports cartoonist Bob Krieger’s job was eliminated at the Province the same day as Murphy’s; Krieger chose to be reassigned to the paper’s web desk.]

That’s a marked diminishing of those respective papers, and — if you want to retain and build readership — trying to sell people less for more isn’t, in my opinion, the way to do it.

DRR: What is it about Deep Rogue Ram that made you want to be part of the team?

DRR: You’ve cooked up this amazing, weird, hilarious Stephen Harper animation for the first week of January. Where did you get the idea for a New Year’s message from the Dear Leader? 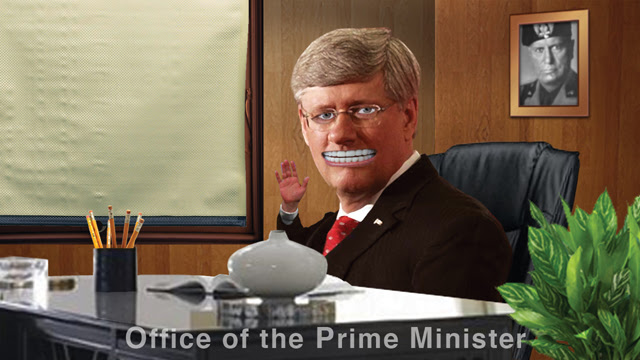 Murphy: I guess popes and Queen Elizabeth are the pioneers of the televised end-of-the-year message, and now prime ministers and kleptocrats and probably your major Kardashians the world over are using the web to do the same. But the Stephen Harper version always inevitably and uniquely seems like it’s beaming to us from 1952 — I always figure it’s gonna be followed by a commercial for Pall Malls — from the festively decorated Diefenbunker rec-room three miles under Carp, Ontario.

Other than trying to capture that feel, the bit is a pretty straight-ahead parsing of what the PM’s really saying. it’s 100% satire free, which I hope people don’t mind.

DRR: Are there things you want to say in your work now that you couldn’t say at Postmedia?

They were also, for the most part, enthusiastic for webvids that did the same, deep-sixing only one (and thus assuring — and if this was their plan, it was brilliant — that that one would get a much wider viewership).

I could feel that support waning at the end — but, no, The Province gave me a nice forum to say exactly what I wanted as long as it didn’t involve the word “cocksucker”.

For the record, Dan is totally allowed to say “cocksucker” in future Deep Rogue Ram videos, if he wants to. We’re proud to be a home for whatever comes out of this wonderful man’s brain. Dan has plenty of other projects on the go, but look for his animation work, right here, in the months to come. 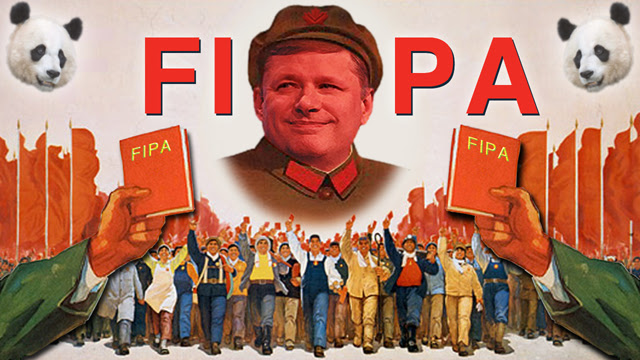