"Self Plagiarism" in Cartooning

From Ted Rall (and Matt Bors). 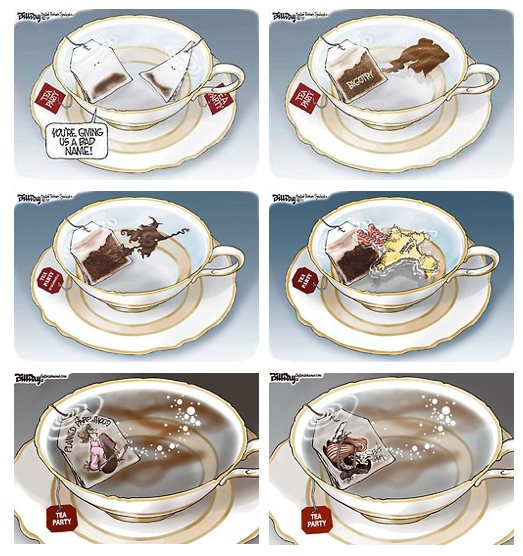 Editorial cartooning, an artform that was invented in caves but perfected by Americans in the 20th and 21st centuries, is in crisis. There is lots of blame to go around: the declining economic fortunes of print media as it failed to adapt to digitalization, terrible editors and publishers who elevated the worst work over the best work, prize committees that did the same thing, and – this pays me to say – an old boys network of cartoonists who refused to state, much less enforce, the same basic journalistic ethics that writers and college students everywhere must adhere to.

Now cartoonist Bill Day is at the center of an emerging plagiarism scandal. (Disclosure: I publicly criticized Day’s work in a letter to the editor of Editor & Publisher magazine during the 1990s, after he won the prestigious Fischetti Award for a cartoon that, to me, seemed like rank hackery.) This will not come as a surprise within the profession. Rumors that Day was a plagiarist have been around pretty much forever. He was especially criticized, over beers, quietly, over what I call the practice of “self plagiarism” – repeatedly repurposing thing the same image over and over and over. Despite a Tumblr blog devoted to Day’s shenanigans, nothing was ever done about it.

Day is syndicated by Cagle Cartoons, a one-man operation run by cartoonist Daryl Cagle, a powerhouse within the syndication world who has earned millions of dollars by monetizing and aggregating his colleagues’ work since the 1990s. When this latest kerfuffle broke, Day was accused of Photoshopping copyrighted artwork from the website Deviant Art without credit or permission. Daryl apparently took down the offending Bill Day cartoon and asked him to replace it with one that was hand drawn. Pretty sleazy. Having worked as a syndicate executive myself, and having been in the position of having to fire a cartoonist for plagiarism, I know what he should have done instead. He should have fired Bill. But that would’ve been very difficult. Why? As it happens, Cagle recently organized an Indieagogo fundraising campaign for Bill that has raised over $33,000 – the purpose is ostensibly to save the cartoonist, his career and prevent the indignity of him losing his home to foreclosure, but it’s hard to avoid the zero sum game aspect of the story as well: this works as a form of subsidy for a syndicate that under pays its cartoonists. (Disclosure number two: $100 of that is mine. And I want it back. I still think it’s important for cartoonists to support each other, especially when they are in financial trouble, but plagiarists aren’t cartoonists. They are thieves.) 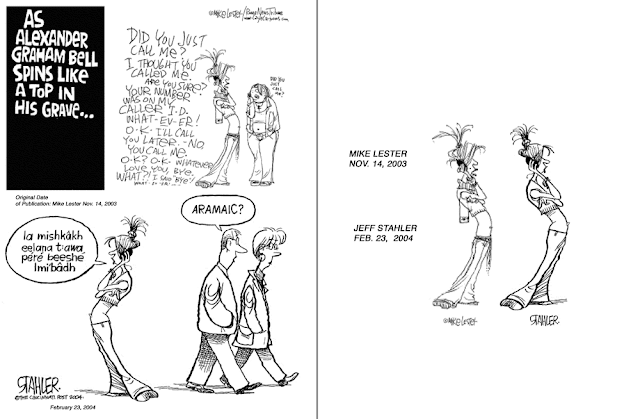 To be fair, Bill Day is not alone. Other cartoonists have been caught plagiarizing. Jeff Stahler of the Columbus Dispatch was a serial plagiarist – I would imagine he probably still is – and although he lost his staff job at a newspaper that wouldn’t give my own work a second look, even though I am an Ohio boy, his syndicate, which also happens to be my syndicate, continues to distribute his work. David Simpson seems to have made quite a career of jumping from one newspaper to another after being fired for plagiarism.

It gets worse than that. 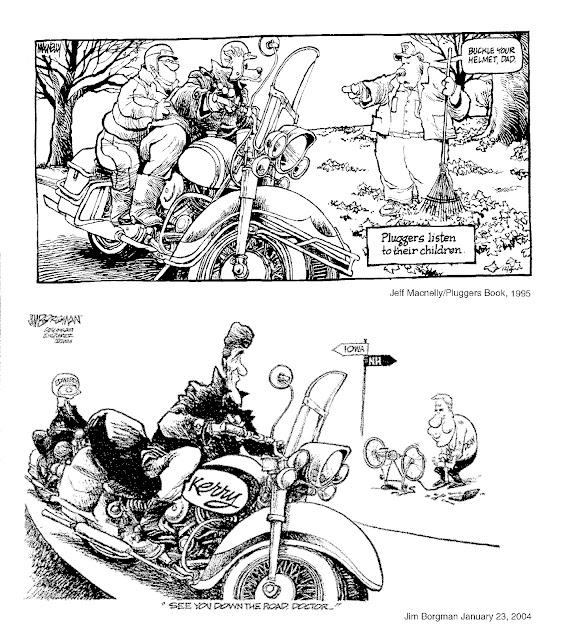 One of America’s most successful and most prominent cartoonists, Jim Borgman, who has won the Pulitzer Prize and virtually every other major award granted to journalists or cartoonists, was forced to admit that he plagiarized, literally lightboxing an image he wanted to appropriate. (Unfortunately, I was ethically and honorbound not to reveal his name. This is because this revelation occurred in an exclusive, secret online forum for editorial cartoonists in which all participants agree not to share anything that is discussed. As of today, however, Matt Bors has outted Borgman via Twitter.)

Bill Schorr, hired by the New York Daily News over yours truly, was also a plagiarist. Serial. 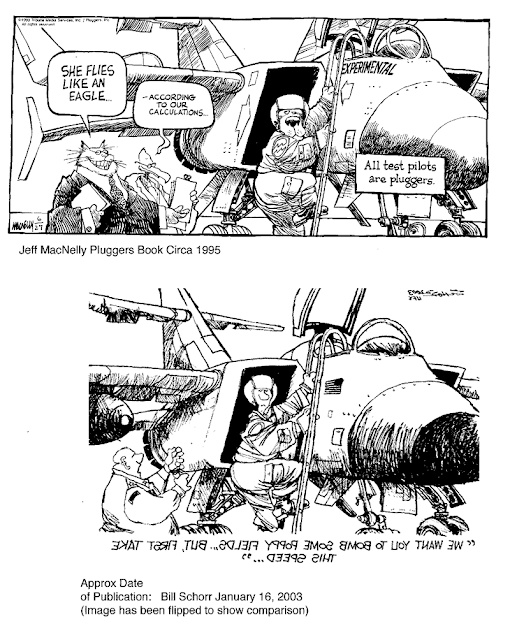 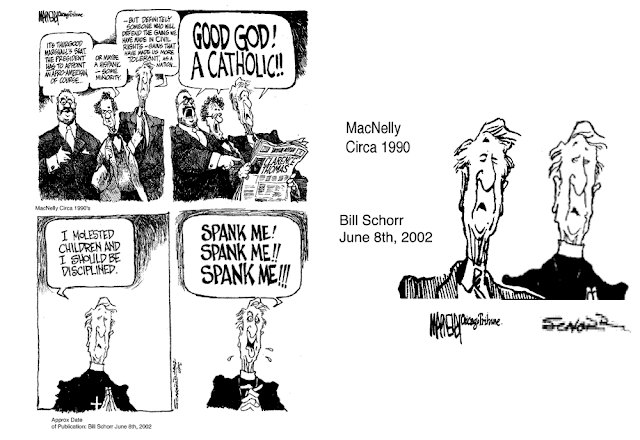 Obviously there are not a lot of negative inducements for the ethically deprived in American editorial cartooning. To the contrary, plagiarists and self plagiarists tend to do quite well, collecting more awards, bigger incomes and getting hired for more prestigious jobs than those of us who think it is our job to come up with something original, thought-provoking and possibly even controversial every day.

I was President of the Association of American Editorial Cartoonists between 2008 and 2009, after the organization had been around for half a century. I accomplished a lot, not least saving the organization from going under completely during the 2008 fiscal meltdown. But my proudest achievement was to push through the first ever ethical component to the associations bylaws: a rule that allows the Board of Directors to expel any cartoonist they deemed guilty of plagiarism. Unfortunately, subsequent Boards of Directors have been namby-pamby and weak willed about something that ought to be pretty straightforward, so much so that in 2011 they publicly declared that they were kind of sort of considering ethical guidelines. They didn’t mention the fact that they already had a very important one that they were empowered to use as they saw fit.

At this writing, there is not only no consensus within the field that plagiarism should be a fatal offense, one that ends your career as an editorial cartoonist forever, but widespread agreement that self plagiarism – the kind of thing that Bill Day did in the Tumblr blog – is fine. One cartoonist, who has won the Pulitzer Prize twice and hold a tasty sinecure at a national newspaper, is so famous for repurposing thing the same cartoons – in this case, he usually redraws them rather than cutting and pasting them in Photoshop, but the effect is exactly the same – that we have learned to predict the sort of events that will prompt his reuse of the same old metaphoric images.

Daryl Cagle, the cartoonist/syndicator even bragged about it in his blog: “It amuses me to reuse old cartoons; I don’t find much opportunity to do it, but when I do, I chuckle to myself and take an extra hour for lunch.”

It isn’t as though some of us haven’t been trying to draw attention to these terrible practices. Every time the leading journalists who cover newspaper syndication and editorial cartooning have been contacted in the past about plagiarism and self plagiarism, however, there has been little to no interest whatsoever in covering the story. Some of the excuses have absolutely been laughable, like the idea that they were cartoons that had been stolen years earlier, and therefore the story was no longer relevant, or that there is absolutely nothing wrong with self plagiarism because no one really expects original content anymore.

It’s hard to know who to hate more: the cartoonists who put out this kind of hackwork, the old boys network of their colleagues who think it’s perfectly fine, or the editors who hire them and the prize committees who rewards them at the expense of people who do original work. It’s a lot like the Lance Armstrong scandal: if you’re a cycler who doesn’t cheat, you really hate losing to people who do. Right now, there are brilliant editorial cartoonists who are repeatedly being passed over for jobs. Most of them are “alternative editorial cartoonists” like me, Stephanie McMillan, Jen Sorensen, Matt Bors, Tom Tomorrow, Ruben Bolling, and don’t get me started about great cartoonists like Lloyd Dangle who literally were driven out of the profession because they couldn’t make enough money. Bill Day, for example, worked at the Memphis Commercial Appeal from 1998 to 2009. He got a salary, full benefits, probably even healthcare. But the same paper never would have considered someone like me or Tom Tomorrow. Hell, they wouldn’t even run us in syndication. And the thing is, these plagiarists and self plagiarists don’t steal good work or create good stolen product. Most of them are B-listers and C-listers, crummy hacks who didn’t deserve to work even if they had been creating original stuff.

Fortunately, there is hope in the form of some editors. One editor responded to the Bill Day story with comments that probably won’t surprise most readers but would come as a shock to the numerous American editorial cartoonists who really don’t think that plagiarism or self-plagiarism is a big deal: “As an editor who subscribes to Mr. Day’s syndicated work, we had always assumed that we were paying for new content. However, it appears that not only does Mr. Day steal the work of others, but has made a career out of using the same cartoon over and over again. My publisher is currently reevaluating the value of this syndicate and the work they provide to our chain of papers.”

That’s nice to hear. It would also be nice if editors like him and others who have been using cheap, low quality syndicates like Cagle and hiring hacks whose work takes no chances whatsoever and is ridiculously derivative and old-fashioned, would hire those of us who actually take this profession seriously.

This little essay isn’t going to make me any new friends, but I am not the kind of person to sit on my hands and stay silent when there is finally a possibility to get the attention of the media. I love editorial cartooning. It is an incredibly powerful and, when done right, important art form. There isn’t much I can do about the terrible taste and priorities of many of the nation’s editors and website managers, but we artists need to hold ourselves to the highest possible standards.
Published by Bado at 4:00 AM