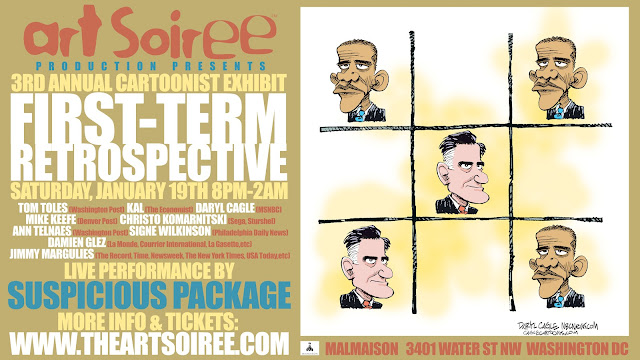 A journey back through Obama’s first-term in the office through the eyes of the world’s most respected contemporary editorial cartoonists.

Join in for a unique night as we bring together the best published political cartoons of 2009, 2010, 2011 and 2012 in a unique exhibition, which will document the highs and lows of those years. They will provide an insightful record in the US history during Obama’s presidency, commenting on politics, society, economy, education, human rights, presidential elections, war, republican and democratic political figures, and more.

CHECK OUT THE CARTOONS and MEET THE ARTISTS BEHIND THE ARTWORK

Editorial cartoons are unlike any other form of commentary. For over 500 years the art of political cartoons has been used to convey social and political messages through the use of images familiar to all of the people in a society.

Visual in nature, cartoons highlight minute details to make a specific point. With simple pen strokes, they provide a commentary in ways that eludes written or spoken reporting, a truly unique historical perspective—entertaining, yet clever, and insightful. In US, this powerful form of art has always reflected key moments in history.

DRESS CODE: Cocktail attire
Published by Bado at 4:00 AM