State of the Art: Illustration 100 Years after Howard Pyle 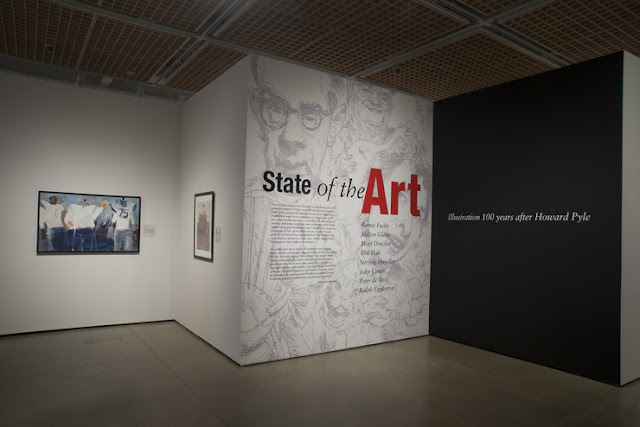 Last year, the Delaware Art Museum put together a major centennial exhibition commemorating the life and work of Howard Pyle, the highly influential father of American Illustration. Pyle lived in Delaware and following his death in 1911, a group of Pyle students and friends combined with influential citizens to form the Wilmington Society of the Fine Arts. Their collection of 100 works by Pyle served as the starting point for the Delaware Art Museum.

To close out its centennial year, the Museum bravely invited me to serve as guest curator for an exhibition onThe State of Illustration 100 years after Pyle. That exhibition will run from February 8 through June 1, 2013.


It would be impossible for any single exhibition to capture the whole noisy riot of styles, techniques and trends that has made up illustration over the past century. My approach was to showcase the work of what I believe to be eight of the best, most important illustrators representing a cross section of today's illustration.

I have argued on this blog that a large percentage of popular illustration today is directed at information-saturated audiences with diminishing attention spans and little taste. Much of the technical skill that previous generations of illustrators earned at a terrible price is now available to any high school student for the price of Photoshop. Many of the periodicals that once made illustration a lucrative profession died long ago. Yet, as the Delaware exhibition demonstrates, there remains a bold, creative core to illustration that is, for me, superior to much of what is taking place in contemporary "fine" art.

For this exhibition I tried to avoid popular illustrators who have prospered today by catering to the lowest common denominator. I was looking instead for the true heirs to the tradition of Howard Pyle, excellent artists who create work of enduring value.


STATE OF THE ART:
ILLUSTRATION 100 YEARS AFTER HOWARD PYLE

Bernie Fuchs began his career creating highly realistic paintings for automobile advertisements. By the 1960s, he was at the forefront of a wave of innovative illustrators whose impressionistic works redefined the field. Before his death in 2009, Fuchs enjoyed a long and distinguished career and became well-known around the world for his sense of color and design.

Milton Glaser is among the world’s most celebrated graphic and architectural designers, recognized for the diverse richness of his inventive work. His achievements range from the iconic “I ♥ New York” logo to complete graphic and decorative programs for public spaces. He has been the subject of one-man shows at the Centre Georges Pompidou in Paris and the Museum of Modern Art in New York.

Mort Drucker is one of MAD’s most famous artists. An influential caricaturist, he is internationally renowned for his pen and ink work and his TIME covers are in the collection of the National Portrait Gallery in Washington, D.C.

Phil Hale pushes the boundaries between fine art and illustration, consistently making powerful compositions and combining traditional realism with moody, complex, and evocative themes. Although highly regarded for his covers for books by Joseph Conrad and Steven King, Hale is recognized internationally for his work in the field of fine art.

Sterling Hundley seamlessly combines traditional artistic media with digital tools. His work has appeared in Rolling Stone, Vibe,and The New York Times. Hundley has won gold and silver medals from the Society of Illustrators in New York and the Illustrators Club in Washington, D.C. An influential teacher and mentor, he is an instructor at The Illustration Academy and a Professor in the Department of Communication Arts at Virginia Commonwealth University.

John Cuneo’s powerful drawings have appeared in many major publications, including The New Yorker, Esquire, Sports Illustrated, and The Atlantic. He is highly regarded for the humor in his work and has been awarded several medals from the Society of Illustrators in New York.

Peter De Sève began as an editorial illustrator in the 1980s and is well known for his covers for The New Yorker, along with his illustrations for TIME and Newsweek. He has also created character designs for animated films produced by Disney, DreamWorks Studios, Pixar, and Twentieth Century Fox, including Mulan, A Bug’s Life, Monsters, Inc., and Ice Age.

Ralph Eggleston was the Art Director at Pixar for Toy Story, the first full-length computer-animated film, as well as for The Incredibles. He was also the Production Designer for films such as Finding Nemo and Wall·E. His work has been recognized for its color and composition, as well as its sense of fantasy. 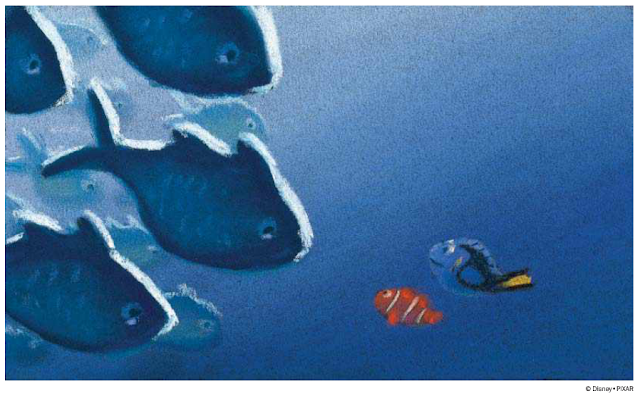 You can browse through the catalog here.
Published by Bado at 4:00 AM