The story behind a San Francisco psychedelic icon


John Mackie in The Vancouver Sun.


One of the best-known images of the psychedelic ’60s is a native Indian in a top hat smoking a joint.

It was the logo for Family Dog, a hippie music promoter in San Francisco that produced gigs by ’60s legends such as Jefferson Airplane, Big Brother and the Holding Company, and the Grateful Dead.

They all used the First Nations guy in their art, often as the central image.

So imagine my surprise to find the man in a new exhibition of early B.C. photos collected by antique dealer Uno Langmann. And on a postcard, to boot.

The show is called Nanitch, and features hundreds of B.C. photos taken between the 1860s and the 1920s. 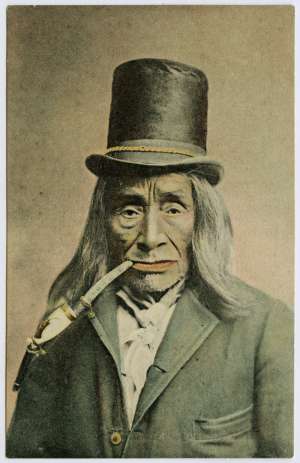 The postcard with the First Nations man in a top hat was produced by Barber Brothers in Victoria, and is hand-tinted.

The image is identified in the 1897 B.C. yearbook as “the chief of the Kootenais (Ktunaxa) in modern costume.” But the man also may be in an 1867-68 photo by Frederick Dally, where he was identified as Tyee Jim.
...

In the original image, the man is smoking a pipe, which Savard says is German. The stem looks to be locally made, partly with a piece of carved antler that Savard said is “incised with a First Nations circle-and-dot motif.”

How it got into the hands of San Francisco hippies is a matter for speculation.

“The story I’m familiar with is that (Family Dog promoter) Chet Helms found it somewhere,” said Victor Moscoso over the phone from his home in Marin County, Cal.

“He gave it to Wes Wilson, who was one of the Family Dog artists at the time, and said ‘Do something with this. I want a logo.’ And Wes did that, and that’s the logo that you see.”

Moscoso doesn’t know if Wilson turned the pipe into a joint by accident or on purpose. But it fit the times.

“You don’t usually smoke grass in a pipe, you roll up a joint,” he said. “And it was more appropriate.”

The Family Dog logo first appears on a Feb. 19, 1966 poster for the Tribal Stomp, a gig featuring Jefferson Airplane and Big Brother and the Holding Company, pre-Janis Joplin.

Moscoso used the logo as the main art for his poster of a Big Brother and the Holding Company show at the Avalon Ballroom on Dec. 9 and, 1966. In Moscoso’s version, the native guy is blue, with swirling pink kaleidoscope eyes. It became one of the landmark images of the psychedelic era.

“I liked the logo,” he said. “And at that point the logo was still pretty new. So I figured, great, I’ll make a poster using the logo as the basis. Only I added my twist to it, of course. I consider that my first truly psychedelic poster. It got me in with the other guys, so I was competing.”