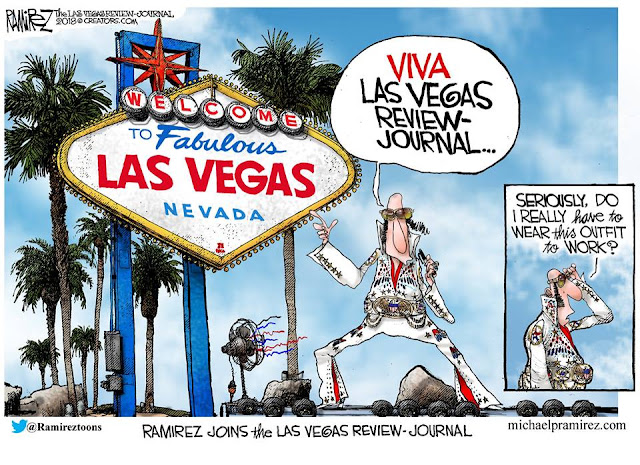 In between organic chemistry and biology, there was surfing.


Ever since he was a teenager, Michael Ramirez loved the ocean.

As an undergrad at the University of California, Irvine in the early 1980s, he’d catch some waves during breaks between classes.

Though he aspired to be a surgeon at the time, Ramirez also drew political cartoons for the school newspaper as a hobby.

He was a natural with pen in hand. “I’ve always had the ability to look at something and be able to re-create it,” says Ramirez, the Las Vegas Review-Journal’s new editorial cartoonist.

This led to Ramirez getting a cartooning gig at the now-shuttered weekly the Newport Ensign.

Their offices just happened to be on the way to the beach.

During Ramirez’s junior year, there was an incident where the Newport Beach Police arrested a man for drunken driving.

“He wasn’t allowed a phone call. They kind of roughed him up a bit,” Ramirez recalls.

“So I did this simple cartoon where I had this guy hog-tied on the hood of a police car, he had a shoe wedged into his mouth, and the arresting officer was explaining to the sergeant, ‘I was merely re-enforcing his constitutional right to remain silent.’

“I thought it was a pretty good cartoon,” he smiles.

Not everyone felt the same.

“The Newport Beach police chief came in and yelled at the publisher, yelled at the editor and tried to find out where I lived,” Ramirez says.

“It dawned on me, ‘What a profound impact this little drawing has.’

That was the trigger that made me change course in my career. I think that was the moment I fell in love with political cartooning.”

And with that, Ramirez was on his way to becoming one of the country’s most distinguished editorial cartoonists.

In the decades since, Ramirez has won the Pulitzer Prize twice, along with an armload of other awards.

He has authored a pair of acclaimed books and has been published in The New York Times, the Los Angeles Times, The Washington Post and hundreds of other publications.

His work also has appeared in the Review-Journal for years in syndication. Now he’s joined the RJ as a full-time staff member.

“What I want more than anything is more people involved in the political debate,” Ramirez says while soaking in the sun on the RJ patio Thursday afternoon, shirt sleeves rolled up, occasionally leaning forward in his seat to emphasize his words.

“People don’t realize the impact they can have. People have far more power than they realize.”

To underscore his point, Ramirez cites a cartoon he drew when he was working at The Commercial Appeal in Memphis in the early 1990s, which critiqued state lawmakers for giving themselves a hefty pension increase by attaching the proposal to an unrelated bill, thereby skirting a vote on their pay hike.

“That cartoon had legs,” Ramirez recalls of the public outcry catalyzed by the piece, which featured a pig that just happened to bear an uncanny likeness to then-Tennessee Governor Ned McWherter.

“Within a week, they had rescinded that bill. That’s the power of journalism.”

Ramirez wields that power like a broadsword: Whether his cartoons skew toward punchiness or poignancy, depending on the topic, they’re meat-cleaver blunt, often wickedly funny and gorgeous to look at, all while scratching at the eyes of political correctness with a knowing wink.

This is a man, after all, who once drew a cartoon of Bill Clinton taking his dog to the vet with the pooch wondering if it was he who truly deserved to be neutered.

“That helps — having a twisted sense of humor.”

As such, Ramirez tends to provoke laughter and outrage in equal measure. The very first cartoon of his to ever get published had some of his fellow students demanding an apology.

It was not forthcoming.

“I’m not into offending people just to offend them,” Ramirez explains.

I want these ideas to resonate so that people will do the groundwork and fulfill the responsibility of being a citizen in a self-governing republic, activate them to action.”

Hate mail, then, doesn’t bother him. Indifference does.

“You have to know that people are going to be dissatisfied, because that’s the nature of politics,” he says.

“I don’t want to be a bomb thrower. But I do want people to participate in the political arena. My job is just to be a catalyst for that.”
Published by Bado at 12:00 AM