Pedro Molina on the human rights crisis in Nicaragua 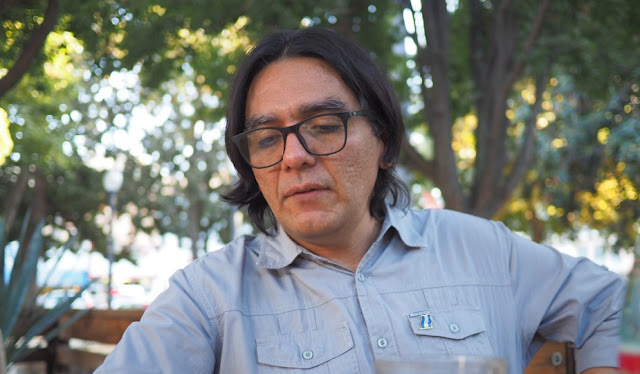 It’s been six months since a wave of protests in Nicaragua sparked violent reprisals by the government of Daniel Ortega and his wife Rosario Murillo.

So far, police and paramilitary forces have killed some 350 people with impunity. The terror shows no sign of abating, with Ortega taking advantage of the fact that the world has bigger concerns right now than his small Central American country.

Artist Pedro Molina is determined to change that. I meet him in Sacramento, California, two days before Cartoonist Rights Network International was due to confer on him its Courage in Editorial Cartooning Award.

He sets the record straight: “I do not have courage. I don’t want to be a hero, or a martyr. I am afraid, like everyone else in Nicaragua.”

He adds, “I am not in more danger than anyone else in Nicaragua. Everybody is in danger right now.”

He is furious that the government has characterised what’s going on as a confrontation between armed groups. “That’s a lie,” he says — the protesters at the receiving end of the state’s brute force have been defenceless citizens.

His cartoons depict Ortega and Murillo as crazed despots. He likens the paramilitary to ISIS fighters. 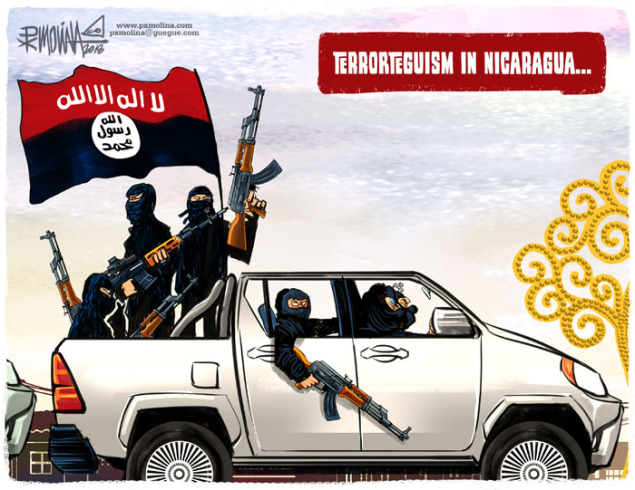 It may seem like he is taking plenty of artistic licence. But these are not wildly exaggerated caricatures, he says. “They are out of their minds, there’s no doubt about it,” he says of the president and his wife, the vice-president. “That’s why they are so dangerous. There is nothing they will not do.”

In addition to presiding over the on-going violence, the Ortegas are guilty of shocking excess in Latin America’s second poorest country. 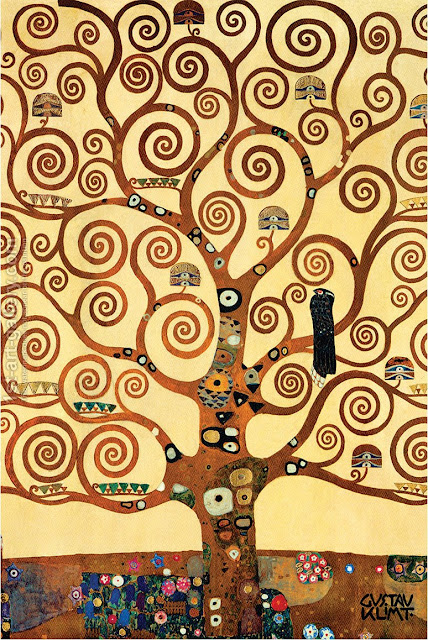 Vice president Murillo, a fan of the artist Gustav Klimt, has erected more than a hundred extravagant outdoor sculptures inspired by Klimt’s “Tree of Life” painting. This has become such a symbol of the regime’s blindness to ordinary people’s needs that many of the sculptures were attacked by protesters.
Molina has turned the Tree of Life icon into a cheeky leitmotif. Its whirly pattern appears in practically all his cartoons, including earning a permanent role as an isolated wisp of hair on Ortega’s balding pate. 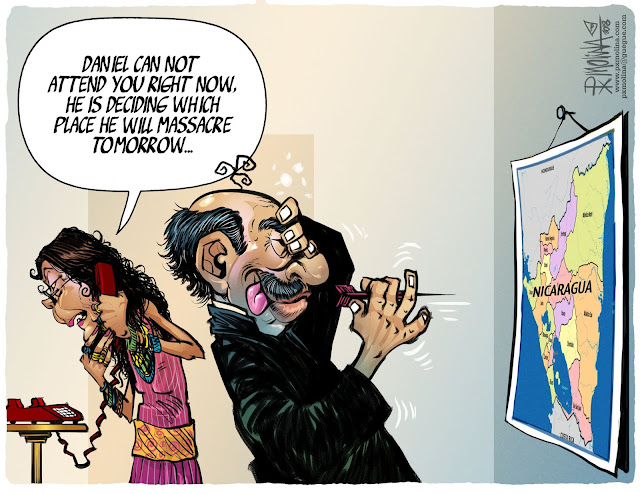 As for the paramilitary, they use the same white Toyota pickup trucks, weapons and masks as ISIS, he says. He tells me how paramilitary elements razed a house because the family would not let the men use their second floor as a sniper’s nest. Two babies were killed.

But if Ortega and gang are so deadly, why does he continue to court danger by poking them in the eye?

Part of the answer is cultural. Even under the Somoza dictatorship, Nicaragua had a tradition of great critical cartooning, he says. He also feels a sense of responsibility to speak for people who feel the same way but are not able to say anything. “If I can do it, I must do it,” he says.

In this video he tells me why it’s important to remain in Nicaragua to bear witness.

Ortega’s fate will have ramifications beyond Nicaragua, Molina is convinced. If he continues to loot and kill with impunity, other authoritarian leaders in the region will be emboldened.

It is vital that the United States does more, he says. But he knows it will be tough to turn the spotlight onto his little country. “We are now fighting so many cruel things happening around the world, from Venezuela to Syria,” he notes. And the American media is understandably focused on Trump.

Recently, Molina spotted a suspicious person outside his home in the middle of the night. He appeared to be carrying something. He ran off when Molina turned on the outside lights.

A couple of days later, a neighbour’s wall was spray-painted with the word “plomo”, meaning the metal lead — a threat that they would be shot.

Last week, trolls on social media suddenly mentioned his wife’s name. It was clearly meant as a signal to him, that they know him.

With his latest award, more people will know Pedro Molina. Perhaps the international profile will give him some measure protection, he says; or perhaps not.

“Nothing is for sure right now.”


This is an extract of an interview conducted in Sacramento, California, in September 2018 for a book project with Sonny Liew.
Published by Bado at 4:35 PM