The Death of Editorial Cartooning

J.J. McCullough in The National Review. 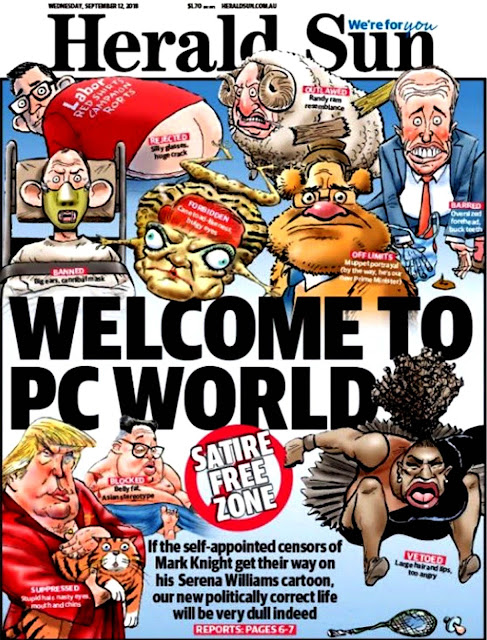 The cartoonist's choice: Navigate a minefield of heightened sensitivities or produce pandering dreck for an audience of ideologues.

It is the opinion of Serena Williams’s husband — and, we assume, Serena Williams herself — that a recent cartoon in the Melbourne Herald Sun depicting the African-American tennis star as a musclebound, pouty diva is “blatantly racist & misogynistic.”

The conclusion is shared by a number of prominent voices on social media.

The cartoonist, Mark Knight, maintains his innocence, and last Wednesday his paper ran a defensive front page (see above) seeking to prove to readers that Knight practices a style of caricature that is hideously unkind at the best of times.

Racism and misogyny are perceived as much as intended, so there’s no real point in attempting to objectively adjudicate Knight’s drawing either way. What the backlash does remind us, however, is that there is not much public appetite for editorial cartooning these days. The medium simply does not fulfill the expectations of modern commentary.

Even before Mark Knight picked up his pencil, Serena’s conduct during the U.S. Open, and her interactions with umpire Carlos Ramos in particular, had become a culture-war flashpoint.

As is often the case with stories of prominent women of color, reactions to Williams’s behavior were understood to serve as proxies for broader judgments of her race and gender.

Whatever the newsworthiness of the episode, caricature was thus a uniquely dangerous tool to document it.

Caricature is the art of exaggerated bodily features, and as matters of intersectional identity come to dominate America’s political conversation, increasingly little good faith will be assumed of anyone who trucks in unflattering physical depictions.

Heightened sensitivity to the cruelties of caricature is hardly the cartoonist’s only obstacle, of course.

At its peak, editorial cartooning operated from a pretense of what is today scorned as cowardly “both-sidesism,” that is, the belief that the political world is an inherently preposterous place with much to deride in every direction.

All public figures were clownish idiots in their own way who deserved to be mocked for their distinguishing failings.

Editorial cartoonists have been as biased as any other flavor of political commentator, with favored targets, blind spots, and the rest. Yet they’ve also faced unique pressure to document the passing scene with a wide satirical net.

Any prominent sociopolitical moment must be reduced to a witty visual summary, regardless of whom it stars. A drawing must be created that depicts conflict, debate, and tension as goofy, irreverent, or entertaining.

Today, however, there is little market for political commentary that possesses any degree of ironic detachment.


“Old school” editorial cartoons of the donkey-and-elephant variety have been quietly shed from newspapers, and very few newcomers have arisen online to replace them. Those that have are revealing in their shrillness.

On the left, there is The Nib, run by my friend Matt Bors. The Nib produces a lot of interesting illustrated essays on history and culture, but its political content is uniformly boring in its rote partisanship.

Cartoonists produce comic strips that largely entail straw-manning the imagined arguments of their right-wing enemies, none of which will appear remotely recognizable to an actual conservative.

Like many on the Millennial left, their work is characterized by deep hostility to anyone who does not consider the stakes of politics as high as they do, or the Left’s agenda as self-evident. This is the mindset of propaganda, not satire. 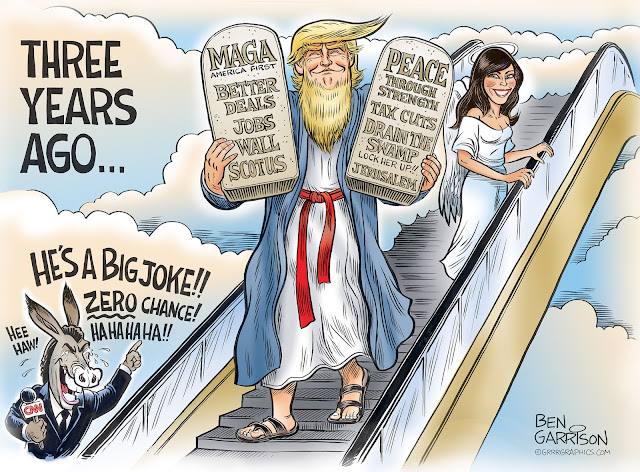 Way on the other end, there is Ben Garrison, the favored cartoonist of the Trump-era Right.

Garrison is a talented artist with firm allegiance to the traditional norms of editorial cartooning, yet his work is so childishly partisan that it’s painful to consume in large doses.

The man is a living example of Poe’s Law — which states that earnestness is often indistinguishable from mean-spirited parody.

A typical Garrison cartoon depicts our lumpy president as a lantern-jawed he-man fighting various embodiments of the Left and stock villains of the crackpot Right (Illuminati, Rothschilds, chemtrails, etc.). This too serves no purpose beyond propaganda.

An editorial cartoon does not have to be funny — indeed, many of the best are not — but cartooning is an inherently light medium just the same.

It is different from editorial illustration, which has no pretense of continuity with the artistic traditions of Disney and Schulz, and can thus get away with more consistently heavy-handed messaging.

A cartoon, by contrast, promises the reader some degree of comic relief. It can be darkly comic or brimming with bathos, but its defining characteristics are still identifiably of the cartoon world, with googly eyes and rubber limbs.

If we are not in the mood for whimsy, however, comic depictions will come off as offensive in their frivolity.

If we are a firm partisan of Serena Williams, or President Trump, or democratic socialism, or whatever else, then it’s easy to ascribe bad faith to depictions that shrink or mock their significance.

In an unforgivingly polarized time, mockery is interpreted as a wasted effort unless directed toward a specific ideological end. If a noble end is not immediately apparent, a hostile one will be inferred.

I drew political cartoons for years but don’t much anymore.

Caricature is now too easily misunderstood, and playfulness too readily scorned as unhelpful or elitist.

To survive today, an editorial cartoonist must either attempt to timidly navigate a minefield of heightened sensitivities — which rarely generates worthwhile insight — or produce pandering dreck for an audience of committed ideologues.

The decline of editorial cartooning may not be the most worrying trend of contemporary journalism, but it is certainly an indictment of the humorlessness of our age.
Published by Bado at 12:00 AM