The Village Voice is no more 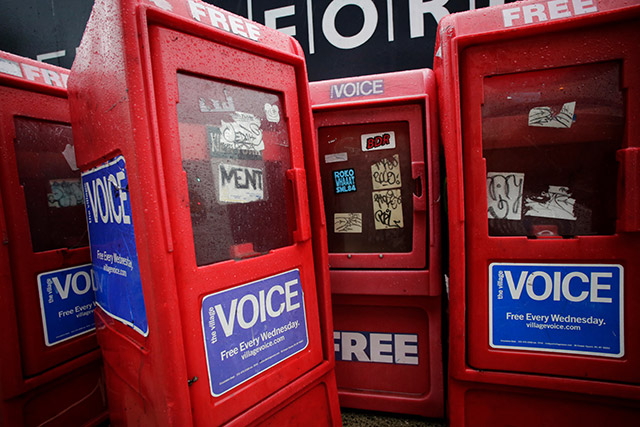 The storied New York tabloid the Village Voice — already down to around two dozen employees — is now officially dead, its owner announced Friday.

Half of the staff will be fired, with the other half hanging on briefly to work on an online archive, owner Peter Barbey told them according to the Gothamist website. The publication has stopped publishing new material.

“I bought The Village Voice to save it,” Barbey told the staffers.

“This isn’t how I thought it was going to end up,” he said, blaming “basically, business realities.”

Co-founded in a Greenwich Village apartment in 1955 by Norman Mailer, the iconic paper was one of the first alt-news weeklies in the country.

Its cartoonists have included Lynda Barry and Jules Feiffer, who in 1981 won one of the paper’s three Pulitzer Prizes.


Some of its most beloved and longstanding writers hung on through a series of layoffs, with nightlife and gossip columnist Michael Musto, restaurant critic Robert Sietsema and theater critic Michael Feingold ultimately suffering the ax in May 2013.

Barbey, scion to the wealthy family that owns The North Face, Timberland, Vans and Wrangler, purchased the paper in October 2015.

The paper closed its free print edition a year ago.

“This is a sad day for The Village Voice and for millions of readers. The Voice has been a key element of New York City journalism and is read around the world. As the first modern alternative newspaper, it literally defined a new genre of publishing.

As the Voice evolved over the years, its writers, editors, reporters, reviewers, contributors, photographers, artists and staff were united by the idea that they spoke for and fought hard for those that believed in a better New York City and a better world.

The Voice has connected multiple generations to local and national news, music, art, theater, film, politics and activism, and showed us that it’s idealism could be a way of life.

“In recent years, the Voice has been subject to the increasingly harsh economic realities facing those creating journalism and written media. Like many others in publishing, we were continually optimistic that relief was around the next corner.

Where stability for our business is, we do not know yet. The only thing that is clear now is that we have not reached that destination.

“The Village Voice was created to give speed to a cultural and social revolution, and its legacy and the voices that created that legacy are still relevant today. Perhaps more than ever. Its archives are an indispensable chronicle of history and social progress.

Although the Voice will not continue publishing, we are dedicated to ensuring that its legacy will endure to inspire more generations of readers and writers to give even more speed to those same goals.

“We have begun working to ensure that the enormous print archive of The Village Voice is made digitally accessible. I began my involvement with the Voice intending to ensure its future.

While this is not the outcome I’d hoped for and worked towards, a fully digitized Voice archive will offer coming generations a chance to experience for themselves what is clearly one of this city’s and this country’s social and cultural treasures.

“From the bottom of my heart, I thank everyone who pulled together to attempt create a new future for The Village Voice. Their passion and perseverance have inspired me. I will always be humbled by the grit they’ve shown and the dedication they have displayed.”