John Freeman in Down the Tubes

On November 7th, the Tate Gallery will publish Comics Art, a new book on the comics form by Paul Gravett, designed by Peter Stanbury.


As well as running an amazing and regularly updated web site on comics, Paul has been the director of Comica, London’s premier international comics festival, since 2003. Titles he’s worked on include 1001 Comic Books: You Must Read Before You Die

. He’s been a champion of the comic form for decades, stretching back to the days when he and Peter Stanbury ran the Fast Fiction stall at the Westminster Comic Marts to sell indie comic zines like The Alternative Headmaster’s Bulletin and my own first comics title, SCAN.

His own magazine title, ESCAPE, edited with Peter, which featured the likes of Hunt Emerson, was for me a glorious first introduction to the world of Britain’s alternative comics of the 1980s.

The Tate describe his new book as follows…

Comics have never been a more dynamic and challenging art form than in the 21st century. The phenomenal growth of graphic novels and manga and the explosion of comics on the internet and other platforms have given their creators unprecedented freedom to innovate. Many can enjoy widespread acclaim in the art world, literary circles and through their multimedia adaptations. Comics Art takes an international approach by tracing lines of influence around the world to give historical contexts and contemporary perspectives for this huge current interest in the medium.

Richly illustrated with many images taken from original artwork and rare artefacts, Comics Art gives a fascinating, accessible guide to some of the special properties of sequential art, such as panels, page layouts, speech balloons and wordless or ‘silent’ narration. It addresses concerns about how comics perpetuate stereotypes and support the status quo, while assessing their growing significance, notably through autobiography and reportage, as vehicles for provocative voices often silenced in other media. Comics Art also explores the diversity of styles, media and approaches now possible in the medium and exciting developments in digital comics and in comics conceived for galleries and installations.

Hailed by The Times as ‘the greatest historian of the comics and graphic novel form in this country’, Paul’s also a regular speaker at comic events and a curator of exhibitions of comics art. He is the author of several other books on the subject, including Manga: Sixty Years of Japanese Comics (2004), and Graphic Novels: Stories to Change Your Life (2005). 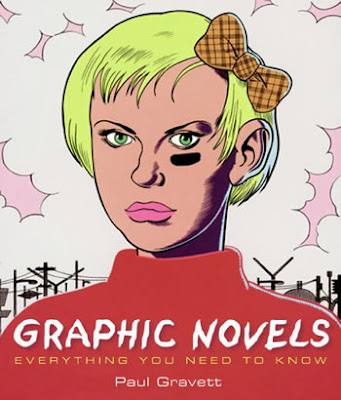 Paul says he’s hoping to have a few advance copies hopefully in time for the Lakes International Comic Art Festival in Kendal on October 18th-20th, where he’ll be in discussion with Joe Sacco, Posy Simmonds, Bryan Talbot, writer Rachel Cooke from The Observer and Jonathan Cape publisher Dan Franklin among others.

A sneak preview of the first chapter on the Yale Press website.
Published by Bado at 4:00 AM