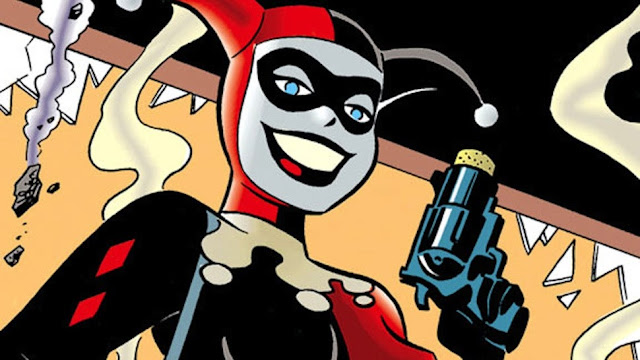 DC Comics has been having a bad week. Last Thursday, two members of the Batwoman editorial team quit after their publishers refused to allow Batwoman (who is a lesbian character) to marry her partner. And now the comic company has provoked even more outrage by hosting a contest in which they readers to draw Harley Quinn, a popular villain, preparing to commit suicide. Naked.

The trope of sensationalized female character deaths has long haunted the medium, as has a terrible tendency to oversexualize and objectify women characters; it's almost surprising that it's taken DC this long to combine the two into a vile heap of casual sexism — because female suicide is so fascinating and compelling and cool, right, guys?

The contest winner will have the opportunity to contribute to an upcoming comic about Harley Quinn; it's billed as an amazing opportunity to break into the industry. In order to be considered, one must draw four panels: in the first, Harley is attempting to get struck by lightning, in the second she's wearing a bikini made of chicken in the hopes that alligators will devour her, and in the third she's attempting to get swallowed by a whale. The fourth is, by far, the worst:

Harley sitting naked in a bathtub with toasters, blow dryers, blenders, appliances all dangling above the bathtub and she has a cord that will release them all. We are watching the moment before the inevitable death. Her expression is one of “oh well, guess that’s it for me” and she has resigned herself to the moment that is going to happen.

(Next week, by the way, is National Suicide Prevention Week.)

One art student expressed her disgust in a comment on the announcement:

I'm a sequential art student, and I find it a bit appalling that the requirement for panel 4 is essentially drawing a female character committing suicide naked. The sexualization of suicide is something I will not be putting effort into for a talent search. I'll let the other fanartist draw naked Harley in a bathtub. I'll gladly draw anything but sexualized characters and suicide scenes for a very well-developed character.


What's perhaps most disturbing about this contest — other than the way in which it showcases DC's blatant disregard for women — is that it essentially prohibits comic artists who are opposed to the eroticization of violence against women from applying for the honor of drawing a strong female character.

Campaign to flood the contest inbox with photos of the poop emoji with eyeballs starts now.

"DC Comics asks artists to show their skill at killing off naked women" [Daily Dot]
Image via DC.
Published by Bado at 4:00 AM