If you have been delighted or moved or provoked by a New Yorker cover in the past two decades, you’re familiar with the genius of Françoise Mouly—though you likely don’t know it. As the magazine’s art director and visual editor since 1993, when new editor Tina Brown hired her to enliven the then-fuddy-duddy publication, Mouly is responsible for a parade of images seared into the cultural imagination: a Hasidic Jew kissing a black woman created by her husband, Art Spiegelman, in 1993; the black-on-black depiction of the twin towers she created with Spiegelman just hours after 9/11; her 2004 cover depicting the American ﬂag stained by the shadow of a tortured Abu Ghraib prisoner; Barry Blitt’s ﬁst bump between the Obamas in 2008 and, more recently, John Cuneo’s depiction of Anthony Weiner sexting astride the Chrysler Building.

Mouly’s influence in shaping the visual vernacular runs even deeper. The Paris-born artist and designer was the driving force behind Raw, an exquisitely produced large-format magazine co-edited with Spiegelman in the 1980s out of their SoHo loft. Only 11 issues were published, yet Raw achieved cult status and paved the way for the mainstreaming of the graphic novel. In 2000, Mouly, the mother of two, appalled at the quality of kids’ comics, founded Raw Junior; the Toon children’s book imprint followed in 2008.

Within the graphic arts world, Mouly is venerated. “Françoise has been one of the most influential people in comics for 30 years,” says Peggy Burns, associate publisher at Montreal’s Drawn & Quarterly, a publishing house inspired by Raw. Mouly is a role model, Burns says: “She’s very generous, very committed to her artists.” Toronto illustrator and author Frank Viva, who is currently finishing his ninth New Yorker cover, praises Mouly as singularly articulate and knowledgeable: “She knows more about comics, illustration and art than anyone I know.” 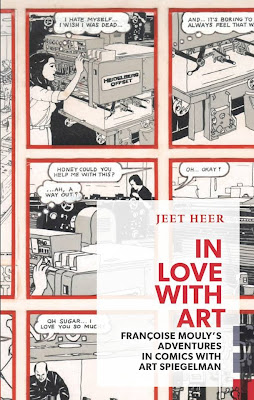 Yet beyond that orbit, Mouly is largely unknown, an imbalance soon to be remedied by Jeet Heer’s In Love with Art: Françoise Mouly’s Adventures in Comics with Art Spiegelman. Heer, a cultural critic and comic aficionado who describes himself as “intra-coastal,” commuting between Toronto and Regina, set out to write about the couple’s creative union before realizing Mouly was the untold story. He believes she’s been overlooked for two reasons: sexism in a traditionally male-dominated ﬁeld and “wife of” syndrome, with Mouly’s career overshadowed by that of her Pulitzer Prize-winning husband, the author of the famed graphic novel Maus.

Heer traces Mouly’s artistic evolution from her childhood in France, where she studied architecture, to New York, where she moved in 1974, knowing no one. She turned to underground comics to learn English, which led her to Spiegelman’s work, then the man. They wed in 1977. Before Mouly, “surgical, literary editing of comics simply didn’t exist,” writes Heer. Mouly is known for both her technical virtuosity and her ability to shape visual ideas. When Viva worked on his first Toon book, an Arctic adventure, it was Mouly who suggested the tale be told from a rodent’s point of view. The result was the whimsical book, A Trip to the Bottom of the World with Mouse.

Mouly is delighted to finally be a subject, she tells Maclean’s: “I was very well-hidden in plain sight.” Being a woman in the “testosterone-driven” world of cartoons was a mixed blessing, she says: “It was quite lonely, but it also worked for me, because I was an outsider—to the culture, to the language.” Being an “enforced observer of the American political system” has informed her work, she says, noting an early draft of the famed “fist-bump” cover showed Rush Limbaugh, Ann Coulter and Sean Hannity peering in a window. Mouly asked they be removed. “It focused blame on them,” she says, “but we were all at that window.” She speaks eloquently about the need for print books and magazines as cultural artifacts—they “fossilize the moment” in a way the web can’t. “They have permanence and authority,” she says; they “hold your fingerprints.” And now, finally, there’s a book that holds hers.

An excerpt of the book on The Atlantic website.
An interview with Jeet Heers in The National Post.