Christopher Knight in The LA Times

Paul Conrad's 'Chain Reaction' remains a vital message and safety concerns have been debunked, so why is Santa Monica determined to dismantle the sculpture?


When the Bulletin of the Atomic Scientists at the University of Chicago launched a magazine in 1947, its editors turned to artist Martyl Schweig Langsdorf for some cover ideas.

The horrors of Hiroshima and Nagasaki were still fresh, and the imminent Cold War arms race was heating up.

Langsdorf, an abstract painter of some note, had never before done a graphic design (and she never did another). But she knew something about the subject: She was married to physicist Alexander Langsdorf Jr., who had worked on the Manhattan Project, designing the atom bomb. 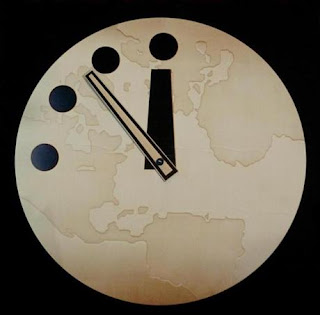 The artist conceived the famous Doomsday Clock. On the June 1947 cover, it was seven minutes to midnight. When she died at 96 in March, the clock had ticked ahead to 11:55 p.m. An immediately comprehensible graphic design showed how near the world was to blowing itself to smithereens in a global nuclear war. The threat analysis recorded in the Doomsday Clock now includes global climate change, but potential nuclear catastrophe remains at its core.

All of which is to say: Those who believe that a controversial Santa Monica sculpture of a monumental mushroom cloud has lost its relevance might want to think again.

A misguided — and perhaps underhanded — move is afoot to dismantle Paul Conrad's "Chain Reaction," a 26-foot-tall sculpture that has stood in place in the Santa Monica Civic Center since 1991.

Why remove the sculpture? Not because of defensible safety concerns.

A scary-looking fence with red "Danger" signs rings the sculpture, but the structural engineer hired last year by Santa Monica officials to evaluate the work declared in no uncertain terms that he is "of the opinion that the sculpture is not an imminent hazard nor should it be considered dangerous."

In fact, his report continued, relatively minor maintenance is all that's required for at least another decade.

The sculpture shows a giant nuclear cloud composed from massive links of forged copper tubing. It carries the same degree of graphic punch as Langsdorf's clock. That's unsurprising, given the artist. 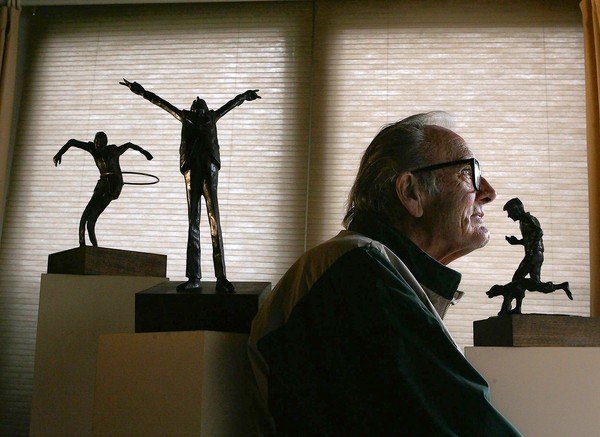 Conrad was The LA Times' editorial cartoonist for 29 years — he died at 86 in 2010 — and he won three Pulitzer Prizes for his incisive and often brilliant drawings. Economy of means is essential to the success of a one- or two-panel cartoon, which is charged with commenting on complex social and political issues. He was as masterful at it as legendary predecessors such as Thomas Nast and colleagues like Herbert Block.

For the sculpture, Conrad merged blunt visual form with a characteristically layered resonance.

The massive pile of links of course refers to the spreading process of neutron fission that makes a powerful atomic bomb so devastating. Another kind of chain reaction comes from the scattering social conversation sparked by editorializing political art, as one person talks to another in agitated, excited or bemused response. Finally, the mushroom cloud's heavy, constricting chain connotes bondage.

The sculpture evokes the ironic subjugation in which life in a nuclear world is lived. We are chained to an anxiety-producing doctrine of mutually assured destruction (MAD) as the surest guarantee of peace.

The incongruous doctrine of peace-through-trepidation virtually defined the second half of the 20th century, as the United States and then the Soviet Union, the United Kingdom, France, China, India, Pakistan, North Korea and perhaps others acquired nuclear weapons. No other work of art I know encapsulates MAD so well. With vast nuclear stockpiles still in place — if not also possibly on the loose — yoking fear and tranquillity hasn't gone away.

The danger is real. And danger is also cited as a motive by those who say that Conrad's "Chain Reaction" should be dismantled.

City officials claim that the 51/2 -ton sculpture, built on an armature of stainless steel and fiberglass embedded in concrete and exposed to the elements for 20 years, is not safe. Children, they told The Times when the fence went up more than two years ago, like to climb on it.

That worry is an apparent nod in the direction of what's called "attractive nuisance law." Sensitivity is demanded for potentially dangerous conditions that are likely to attract children.

Why the worry might apply to "Chain Reaction" but not to, say, Eugene Morahan's larger-than-life, eminently scalable 1934 sculpture of Santa Monica in Palisades Park is difficult to fathom. But the attractive nuisance law is often wielded against public art that someone simply doesn't like.


According to published reports, the city says that "Chain Reaction" is no longer structurally sound. However, three thorough studies — one from an art conservator and two from structural engineers — suggest otherwise. They cite fairly minor problems.

The most recent report says that the "copper tubes are in good condition" and "should not be a safety issue." The concrete strength "is adequate for the loads." Any internal rusting of the steel "is not significant" and is "easily repaired." The sculpture was "constructed in a satisfactory manner" in 1991 and today "remains compliant with current standards."


The city has put a price tag of more than $400,000 on repair of the sculpture, which supporters have until mid-February to raise. (According to Dave Conrad, the artist's son, the support group Save Chain Reaction has collected about $20,000 in small donations toward that nearly impossible goal.)

Why $400,000? The figure doesn't come from the experts, who declined to make estimates.

The huge conservation figure is virtually identical to the sculpture's entire fabrication cost — from scratch — once $250,000 is adjusted for inflation. Coincidence?

The Santa Monica Arts Commission assumes responsibility for ongoing conservation of artworks belonging to the city except, that is, when it deems those costs to be excessive. Then, all bets are off. A work once accepted for the city can be removed from public display — or even permanently deaccessioned from the civic art collection, a rarity that has only happened twice before in Santa Monica's history.

That has already happened to "Chain Reaction." (The city's Landmarks Commission promptly gave it landmark status, complicating the removal plan.) Excessive maintenance cost was one of five reasons cited for dumping the work.

The others were claims that the sculpture is a "threat to public safety"; that its security "cannot be guaranteed"; that it exhibits "serious or dangerous faults in design or workmanship"; and, last but not least, that it "is in such a deteriorated state that restoration would prove unfeasible, impractical or would render the work essentially false."

Really? Those Chicken Little assertions don't come close to matching what the technical experts hired to analyze the sculpture wrote. "Chain Reaction," remember, "is not an imminent hazard nor should it be considered dangerous."

Given all that, a bill for more than $400,000 certainly seems excessive. I suppose that failure to meet a demand to raise such a princely (if unnecessary) sum would be one way to force a sculpture to be shelved, regardless of its artistic significance.

Should kids be discouraged from climbing the sculpture? Yes; and the common solution of putting up a discouraging sign would be relatively inexpensive. So might the modest addition of a reflecting pool around it. As the city prepares for the removal of an important work of art embedded in civic history, it seems that Santa Monica, not the sculpture, is the real attractive nuisance.
Christopher Knight, Los Angeles Times Art Critic
christopher.knight@latimes.com
Published by Bado at 8:18 AM