From Tom Eblen's column in the Lexington Herald-Leader 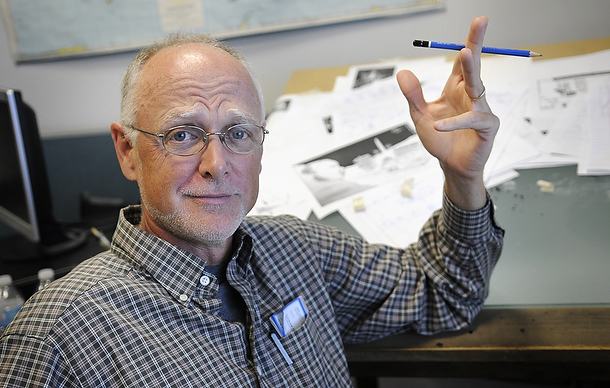 Joel Pett just turned 60, and he has spent a lot of time lately going through his three decades of editorial cartoons for a retrospective exhibit at the Carnegie Center for Literacy and Learning.

“If you ever want a humbling experience,” Pett said, “I recommend you look through your entire life’s work.”

Pett makes his living by mocking important people, challenging power structures and opining on a wide range of political and social issues. He frequently offends Lexington Herald-Leader readers, and he considers that part of his job. 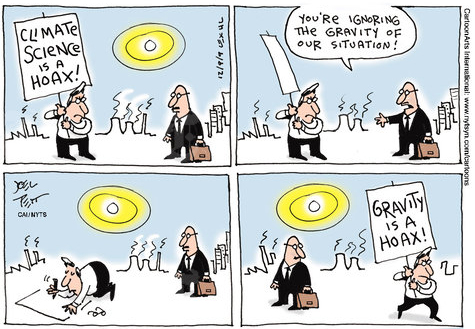 He is good at what he does. In addition to appearing in the Herald-Leader almost daily since 1987, Pett’s cartoons have often been published in other newspapers, including The New York Times and USA Today. He won the Pulitzer Prize for cartooning in 2000 and was a finalist in 1989, 1998 and 2011.

When Pett isn’t drawing cartoons or playing golf, he occasionally gives speeches and performs in nightclubs as a standup comic. You never know if he is being serious or just seriously funny.


More than 50 of Pett’s cartoons will be on display Sept. 18 through the end of October at the Carnegie Center, 251 W. Second Street. The exhibit opens with a sold-out panel discussion featuring Pett and four other well-known cartoonists: Signe Wilkinson of the Philadelphia newspapers, Jack Ohman of the Sacramento Bee, Rob Rogers of the Pittsburgh Post-Gazette and William Hamilton of The New Yorker.

“It’s an opportunity to do something not just for me but for the Carnegie Center,” Pett said. “Everybody has an investment in teaching future generations to read, although they will just take our jobs.”

Pett said that preparing this show made him realize how fortunate and improbable his career has been.

“I have been ridiculously lucky,” he said. “I did not prepare myself in the classic way for this by studying art or political science, or even graduating from college.”

Pett grew up in Bloomington, Ind., where his father taught at Indiana University. When he was 6, the family moved to Nigeria for five years.

After returning to Indiana, Pett became interested in editorial cartoons by following Hugh Haynie’s work in The Courier-Journal. Then a friend’s father gave him a book about Herblock, The Washington Post’s cartoonist for 55 years.

“This was the only job that I ever saw and thought that, A, I could teach myself to do it and, B, would be worth doing and fun,” he said.

After two years of lackadaisical study at Indiana University, Pett dropped out and started submitting cartoons to the Bloomington Herald-Telephone. He then applied to be the staff cartoonist in Lexington. Looking back on some of his early work, he is still surprised he got the job.

“The biggest thing that struck me was how lucky I had been to be given about a 12-year learning curve, during which time I was tolerated and the stuff was really spotty,” he said. “There was some good stuff, but an awful lot of mediocrity.”

One lesson Pett said he learned was to “stop doing things I can’t do.” Such as trying to be a great artist, like Pat Oliphant or the late Jeff MacNelly. “I can see times when I tried that, and it looks like hell,” he said.

Good editorial cartoons are more about the idea and message than the art, anyway. And Pett’s messages often rub conservatives the wrong way. 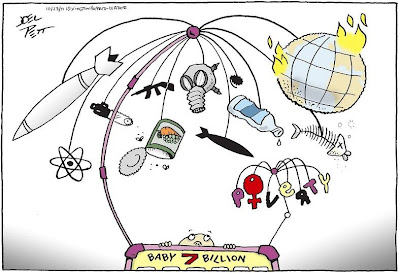 “I grew up on a college campus in the 1960s and in a Third World country,” he said. “All of us are products of our environment.”

But Pett also thinks that what some readers see as political liberalism is simply his way of questioning conventional wisdom and the status quo. That, he said, is what good editorial pages and cartoonists are supposed to do.

Pett said the issues he draws cartoons about never seem to change: political corruption, militarism, poverty and hunger. Another issue that bothers Pett these days is political polarization, not that he is helping matters any.

“It does seem the country needs moderating voices,” he said. “I try to be that when I’m in other situations. But that would make for really lousy political cartoons. My mother’s advice — “If you can’t say anything nice, don’t say anything.” — was the worst career advice ever given.”