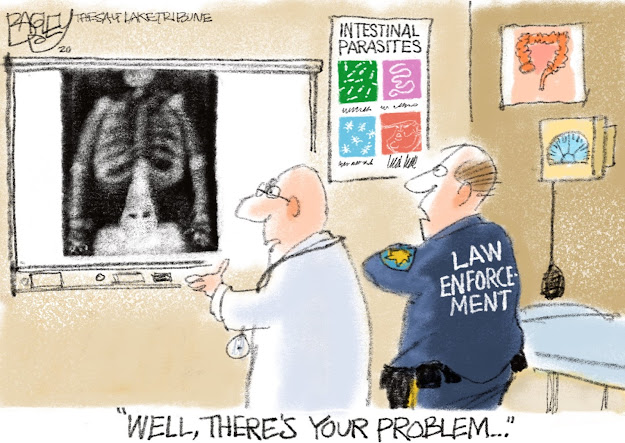 The Utah Sheriffs Association has issued a stern rebuke of the Salt Lake Tribune and editorial cartoonist Pat Bagley in response to what it called a divisive and prejudicial cartoon.

In sharing the cartoon on his Facebook page, Bagley wrote that," White supremacists have made a point of infiltrating law enforcement. That's a fact. That's a problem." 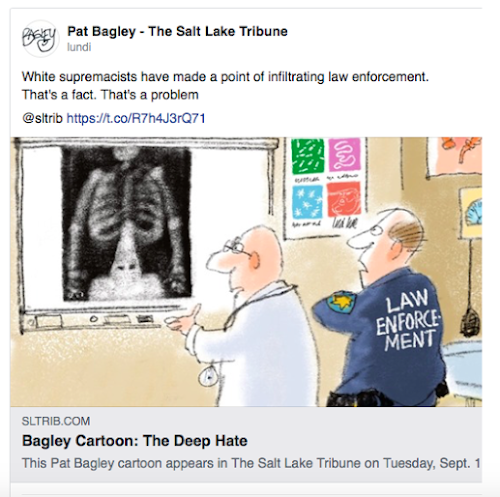 But the sheriffs association called the cartoon a "cheap shot" and stated it would "fan the flames" as law enforcement and community leaders attempt to address grievances from Utah citizens.

Bagley was a finalist for the Pulitzer Prize in Editorial Cartooning in 2014 and has been a Tribune cartoonist since 1979.
He's not known to shy away from potentially controversial topics, and is often critical of Utah's predominantly conservative Republican leadership.
Still, clearly law enforcement and some community members think this time he went too far.

"This is not the time for such a divisive piece of journalism, if you can call it journalism," the sheriffs association wrote in a public statement on Wednesday, "as tensions are already high in Utah and across our country." 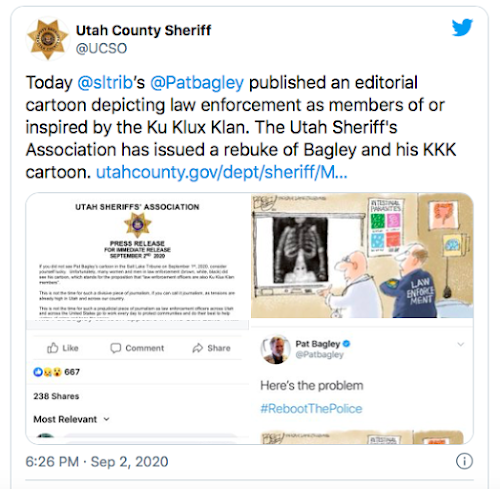 In response, Tribune editorial page editor George Pyle said political cartoons are supposed to raise issues that should be faced, and white supremacists infiltrating law enforcement is one of those issues.

"The cartoon was not meant to say — and, in our view, does not say — that every law enforcement officer is a white supremacist," Pyle wrote in an email to 2News. "It does say that it is an issue that the law enforcement community should face and deal with."

Pyle referenced a 2016 PBS report outlining concerns about racial bias in policing, which states the FBI has warned of "white nationalists and skinheads infiltrating police in order to disrupt investigations against fellow members and recruit other supremacists" since 2006.

He also points out that the officer depicted in the cartoon "has rightly gone for a checkup because he felt that something was wrong."
He is clearly not pleased with what he is seeing in the X-ray and, having seen it, may well resolve to take appropriate action. At least we can hope," Pyle wrote.

The Utah Sheriffs Association also accused the Tribune of blocking, rejecting and hiding the comments that poured in in response to Tuesday's cartoon.
Pyle says online comments on the cartoon are still active on the newspaper's website.

On Wednesday morning, the paper printed a letter to the editor calling for a public apology to law enforcement and Tribune readers.
The sheriffs association also demanded an apology.

Also in response to the cartoon, pro-police organizations planned a rally at the Tribune offices in downtown Salt Lake City on Thursday to "Back the Blue: Boycott the Salt Lake Tribune."
UPDATE
"Police supporters protest Pat Bagley cartoon at The Salt Lake Tribune printing press"
Published by Bado at 6:36 AM