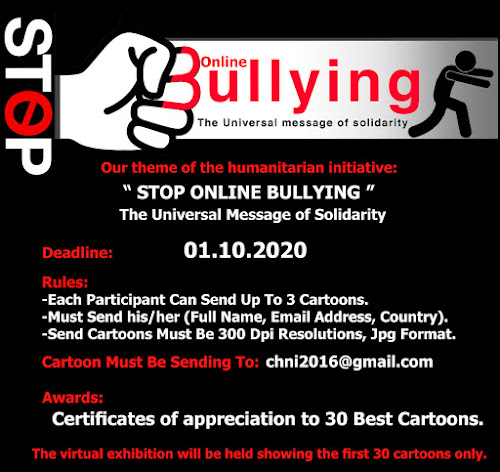 Bullying is the use of force, threat, or coercion to abuse, intimidate, or aggressively dominate others. The behavior is often repeated and habitual. One essential prerequisite is the perception, by the bully or by others, of an imbalance of social or physical power, which distinguishes bullying from conflict.

Behaviors used to assert such domination can include verbal harassment or threat, physical assault or coercion, and such acts may be directed repeatedly towards particular targets.

Online bullying can include:
-sending insulting or threatening messages
-posting unkind messages or inappropriate images on social networking sites
-excluding others from online chats or other communication
-inappropriate image tagging
-sharing someone's personal or embarrassing information online
-creating hate sites or starting social exclusion campaigns on social networking sites
-sharing unflattering or private images, including naked or sexual images
-assuming the identity of another person online and representing them in a negative manner or manner that may damage their relationship with others repeatedly, and for no strategic reason, -attacking players in online gaming.

-Each participant can send up to 3 cartoons at: chni2016@gmail.com
-Must provide his/her full name, email address and country of residence.
-Cartoons must be in jpg format at 300 dpi resolution.

Certificates of appreciation to 20 best cartoons.

-The virtual exhibition will be held showing the first 20 cartoons only.

The initiative is in collaboration with: