The Society of Illustrators reopens to the public 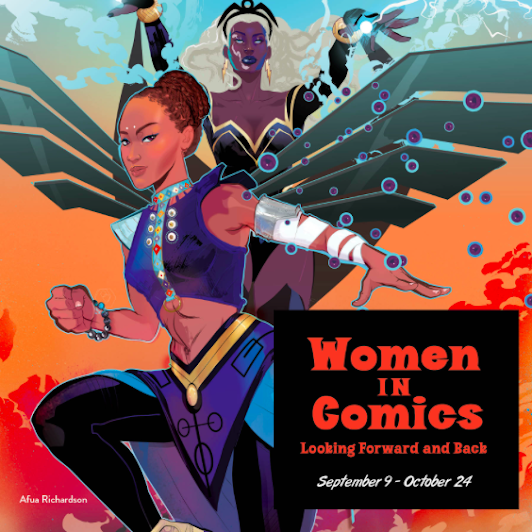 The Society is happy to reopen to the public tomorrow, September 16 with two great comic exhibits.
Women in Comics: Looking Forward and Back
September 9 to October 24, 2020
On display in the main floor gallery.
Over 50 women cartoonists from vintage comic strips to cutting edge graphic novels explore themes common to the female experience such as love, sexuality, motherhood, creativity, discrimination, and independence.
75 works drawn from the collection of the author and herstorian Trina Robbins show a progression of witty women from the Flapper era to the psychedelic women’s comix of the 1970s, including original drawings from Nell Brinkley, Dale Messick, Tarpé Mills and Lily Renee.
Women struggled for recognition in the male-dominated field of newspaper comic strips and thrived with popular characters like the Brinkley Girls, Flapper Fanny, Mopsy, and Brenda Starr.
Women drew adventure, superhero, and romance stories for comic books during World War II, until the men came home and claimed their jobs. Women came back to comics in the 1970s.
Artists Ramona Fradon (DC) and Marie Severin (Marvel) drew mainstream characters like Aquaman and Plastic Man, while artists Trina Robbins, Barbara “Willy” Mendes, and Jewlie Goodvibes created independent underground comix aimed specifically at female readers. 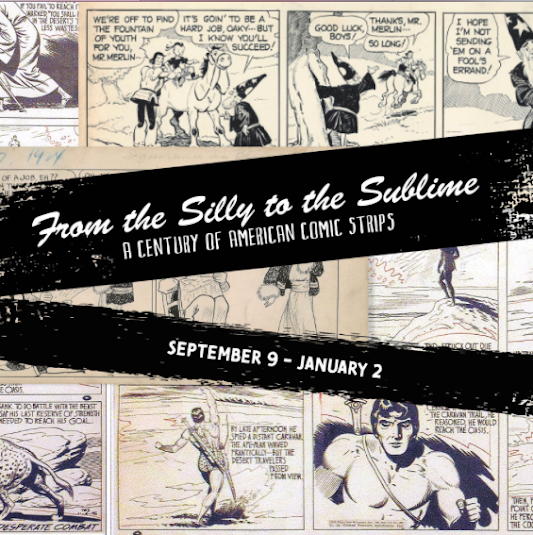 From the Silly to the Sublime: A Century of American Comic Strips
September 9, 2020 to January 02, 2021
On display in the 3rd floor, Hall of Fame Gallery.

Artists Andy Warhol and Roy Lichtenstein grew up with newspaper comic strips in their youth and later became icons of Pop Art, incorporating images into their art that they found in newspapers and comic books.
The American comic strip inspired these artists and many others, bringing the popular art of the times into our museums. It was a foundation for them to blast off from with their careers.

Newspaper comic strips were very popular starting in the early 1900’s. They helped sell newspapers nationwide.
In fact, the first comic books created were reprints of the daily and Sunday newspaper comics’ features.
Later new material, like Superman and Batman, were created in the 1940’s expressly for the comic book industry. Ironically, these heroes became newspaper comic strips also.
You might say that the popularity of the newspaper strips ignited a booming industry for comic books, and also became a foundation for Pop Art.

The characters and their creators were stars in their own time. Movies, serials, books and toys grew out of this unique and creative foundation. The writers and artists who had syndicated newspaper strips around the nation were celebrities.
Two unique art forms were born out of American popular culture: jazz and comic strips!
This exhibit pays tribute to the art of the comic strip. The masters of pen and ink like Milton Caniff, Burne Hogarth and Alex Raymond were but a few of the artists who had their work in newspapers for many generations to enjoy!

In addition to featuring these important pioneers, this exhibit includes a host of noteworthy luminaries including the 1950s Sunday of Donald Duck by Al Taliaferro.

The centerpiece of the show is a selection of art from the greatest comedic American comic strip, Peanuts, by Charles Schulz.
Peanuts is celebrating 70 years since its creation. The Peanuts works are exhibited in conjunction with the release of the Peanuts Papers, a delightful new book edited by Andrew Blauner, which brings together a roster of writers and artists who share what Peanuts teaches us about disappointment, melancholy and possibly the meaning of life. 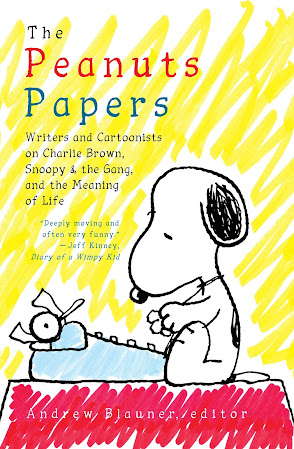 The exhibit also includes post 1960s comic strips that were informed by the turmoil and counter -culture movement that caused an upheaval of previously accepted morals, ideas, traditions and art styles.

Other notable works include renown and prolific DC comics artist Al Plastino.
Until timed ticketing is available, please call or email to reserve your timed entry. Please review our health & safety guidelines to prepare for your visit: https://societyillustrators.org/welcome-back